You’ve probably already seen him. He’s been spotted both in the Marigny and on Magazine Street, pushing his cart with its distinctive homemade sign. Earlier this week I had the privilege of meeting a man who has a remarkable story: a man who for over two years has been walking across America, from the west coast to the east, a man who has just arrived in New Orleans.

Ladies and gentlemen, meet George Stroop: advocate, motivator, and walker extraordinaire. He’s in town all this coming week. Let’s show him a good time while he’s here, shall we?

First, a little back story. As his website, enjoythewalk.org, details, George’s walk began after his mother passed away from cancer while he was a young boy. Though he didn’t fully understand it at the time, he now sees this tragedy as very likely having been preventable, and as an adult became determined to spread this message – that healthy lifestyles and good decisions can prevent a deadly disease – to everyone he met. Feeling called to go on a life-changing walk, and setting a course from his home in Washington state to Washington, DC, he boxed up his things, strapped on his pack, took the first step, and never looked back.

Having walked the length of the Pacific coastline, crossed the southern Rockies, and traversed the desert southwest – he calls that region, in an amazing turn of phrase, “fast miles” – George’s current goal is to reach the White House by Election Day, and to continue spreading the message of healthy living. Ever humble and gracious, George admits that the walk has been a learning experience, in that he had first thought he would be done by 2010, and that his initial goal of 20 miles per day, while doable, quickly fell by the side of the road. He was too strictly focused on meeting his quota in those first few months, he says, and not on the purpose of the journey: to meet people, to share stories, and to enjoy and appreciate the unexpected and the serendipitous.

George has had ample time to reflect upon his journey, and having met and spent time with people from all walks of life – literally from bikers in Oregon to hunters in Louisiana – he says that one of his greatest realizations thus far has been how we all have something in common, despite our differences. “There’s beauty in everyone,” George says, “it’s just that some may just be more deeply buried in some people than others.” To prove the point, he tells me that in his two years on the road, he’s never had a bad experience yet – no threats, harassment, or aggression, or anything like.

Asked what his greatest challenge has been, George immediately claims the mental aspect of the journey. “It’s 99% mental,” he says quickly. “Keeping focused, calm, and determined.” While he had to overcome a great deal of fear and apprehension to undertake the journey, he says that the most important thing has been his intuition, and that in his solitary hours he considers his path on a regular basis, assessing his surroundings and making sure he’s headed in the right direction. After he leaves New Orleans, he’s headed east along Highway 90 through Mississippi, then up the Atlantic seaboard into Washington.

But that’s all in days to come. While he’s here, apart from relaxing and catching up on work, he wants to make the most of his time. George isn’t asking for money – his walk is in no way, he stresses, a fundraiser – but he does accept gifts of food and shelter, and is grateful for any hospitality offered. He’s been seeking recommendations from locals since he arrived, but since we here in New Orleans do hospitality the way the Pope does Mass, I wanted to throw the door open for him and publicize a few of his hopes and goals for his time in New Orleans. He’s got one week left starting today (March 25), so les bon temps doivent rouler!

He’s had a few ideas and a few sponsors already. The Tennessee Williams Festival has already agreed to sponsor him on a walking tour of the French Quarter – having walked across the nation, George will soon be taking a walk around one of our national treasures. It’s possible you might just see him with the playwright himself. But George still wants to explore the city’s music scene, so anyone out there who can invite him out to a gig or to a club and show him how we do it, he’d love that. If you’ve got a spare ticket to something this week, or you’re a venue owner and you can hold the door open a little wider, then by all means, get in touch.

That, and he loves talking to community groups and schools to spread his core message of healthy living, so if you’re a teacher, a community organizer, a principal, or a nonprofit worker, George would love to come and share his story with you and your organization. Speaking from personal experience, his story is an incredible inspiration, and one that, while he’s in town, should not be missed. The best way to reach George is through his website, at enjoythewalk.org, or by email at enjoythewalk@gmail.com. When you see him, wish him well, and wish him good speed – to quote Robert Frost, he has “miles to go before he sleeps”! 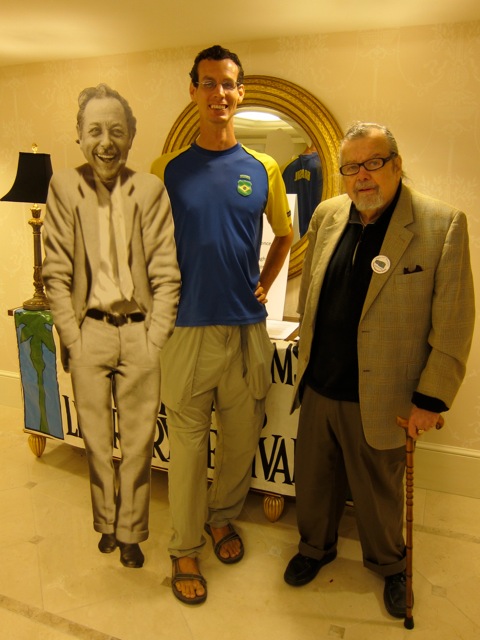 Benjamin Morris is the author of Coronary, a poetry collection, and The Bella, a novella. Around town, he can be found catching music on Frenchmen, crawling the galleries on St Claude, playing soccer in City Park, or tending bar at the Sovereign Pub Uptown. His column appears on Sundays. He can be reached at benjaminmorris@nolamessenger.com.