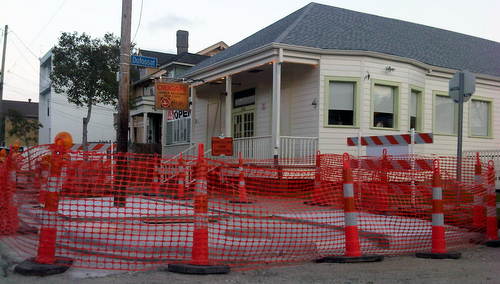 Construction barriers have surrounded the corners in front of Origami restaurant on Freret Street for weeks. (Robert Morris, UptownMessenger.com)

The city’s plans for rebuilding the sidewalks along Freret Street were the subject of growing skepticism for years amid the project’s many delays getting started. Since the project finally started in January, construction has enveloped two corners at a single intersection for more than two months, and the Freret merchants’ frustrations have grown into outright fury as their annual festival approaches.

Valerie Moten of the city Department of Public Works began a meeting with the The New Freret business and property owners association on the defensive, saying she understood that many merchants have been asking, “Why are we still on the same two corners?” When the contractor — F.H. Paschen — began cutting into the sidewalk, they found it about twice as thick as a normal sidewalk, with the mesh inside it in an unexpected position. In short, she said, the contractor faced a “huge learning curve” about “New Orleans conditions in general,” but that they had adopted a new staggered approach to construction that should shorten the total time at each intersection to 8 to 10 days.

“Why on our time are these lessons being learned?” asked Chip Apperson, owner of High Hat Cafe. “This learning curve thing has really got me confused.”

The disruption at the corner has been particularly disruptive to Origami, the new sushi restaurant that had only been open about two months when construction surrounded its entrance. The contractor put up an orange sign stating that the business is open, but the merchants on Freret said more should be done to compensate Origami.

Lauren Anderson of Neighborhood Housing Services said the contractor should purchase advertising that assures the public that Origami is open amid the construction. The ads could even reference Paschen in a positive way, stating that the company is proud to be a part of Freret’s rebirth, as long as the message was clear in promoting the new restaurant.

“There were some errors and omissions on their part,” Anderson said. “They have a profit built in. I would ask they make a commitment to do some of this advertising.”

Moten said she would look into what could be done.

Moving forward, the merchants said they were increasingly concerned about the project’s effect on the upcoming Freret Street Festival on April 7, which is expected to draw 20,000 people to see performances on four stages. The contractor’s new staggered construction plan could mean different crews are working on as many as five different corners at once, and promises that all the construction equipment would be off the street by the time the weekend arrived did little to reassure the merchants.

“I’m worried about the demolition crew if we have these big open areas,” said festival organizer Michelle Ingram of Zeus’ Place. “I need the sidewalks free and clear. I just want to make sure that nobody falls into a hole and breaks a leg.”

City officials promised to meet with Ingram, but Ensslen said the contractor should instead concentrate on finishing the corners already open prior to the festival, instead of starting on new ones. The contractors replied that could create more bottlenecks down the line.

The project is still slated to be complete in September.

After the discussion of the roadwork finished, the merchants discussed several other issues:

Crime cameras | Bryan Lagarde of ProjectNOLA described his organization’s new effort to install military-grade surveillance cameras around the city to simultaneously protect businesses and help NOPD solve crimes. The HD cameras are discretely installed in a place that monitors the front of the business and part of the sidewalk and the street, so that if a crime happens nearby and the victim has only a partial description of the suspect, the camera may catch the perpetrator fleeing and get a more complete image of a suspect. ProjectNOLA pays half the cost of the camera and monitors police radio channels, so that they can sometimes email NOPD detectives video of a suspect before they even arrive on scene.

Summer Camp| The Freret Neighborhood Center is sponsoring its sixth year of summer camp for neighborhood children, and representatives of the center asked businesses to consider sponsoring the program in any way they can. If finances are too tight for an outright donation, they suggested the restaurants might be able to create a special menu item to benefit the camp whenever it was ordered.

Worker’s Comp | Mark Tullis of LCI Worker’s Comp made a short presentation to the association, describing the benefits he said his company could offer. Having a local company to work with is a significant benefit when an employee files a claim, Tullis said, and LCI particularly specializes in serving small and new businesses, offering a range of business development classes and workshops to its members in addition to the insurance.