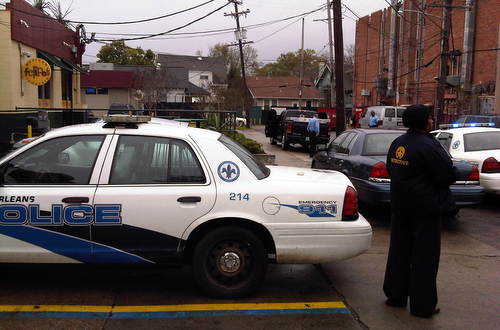 Police block the end of South Miro as they investigate a shooting incident in the Felipe's parking lot. (Robert Morris, UptownMessenger.com)

A vehicle fleeing a restaurant parking lot and dragging an employee trying to stop it Monday afternoon was shot at by another man, authorities said.

The vehicle escaped, and it is unknown whether anyone inside it was wounded, police said. The employee was treated for injuries sustained in the dragging, and his condition was not immediately available.

Around 12:30 p.m., a customer at Elio’s just off South Claiborne Avenue tried to pay with a counterfeit $50 bill, but the cashier recognized the forgery, said NOPD Second District Commander Paul Noel. When the cashier tried to call 911, the customer grabbed the cell phone away and ran outside, Noel said.

Employees from both Elio’s and Felipe’s next door followed, and one Felipe’s employee tried to stop the customer’s car as it was pulling away, but the vehicle instead began dragging the employee. At that point, the cashier from Elio’s pulled a handgun and shot the vehicle several times.

In the parking lot of Papa John’s next door, Ali Ayad was waiting for a pizza when he heard the gunshots, he said.

“I said, let me see where they’re coming from, because stray bullets have no name,” Ayad said.

Ayad said he saw a man firing at what appeared to be a fleeing newer-model Nissan, striking the car several times before it got away on Calhoun Street.

Noel said no charges have been filed in the incident, as it remains under investigation. In general, police recommend witnesses to a crime in progress limit their direct involvement, Noel said.

“Being observant, getting as much detail as possible and notifying police is the most important thing you can do,” Noel said.

Police are seeking video from the busy commercial parking lot at the end of South Miro, which was blocked by crime scene tape until about 2 p.m. No description of the suspect or the vehicle has been released.

A representative of Felipe’s at the scene declined to comment on the shooting. 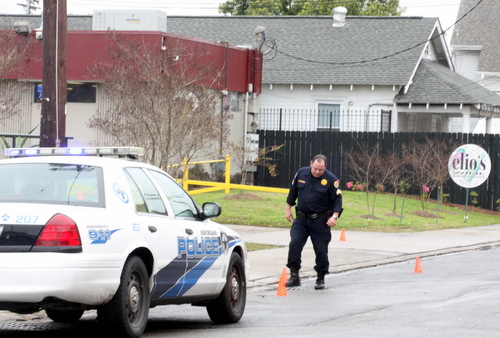 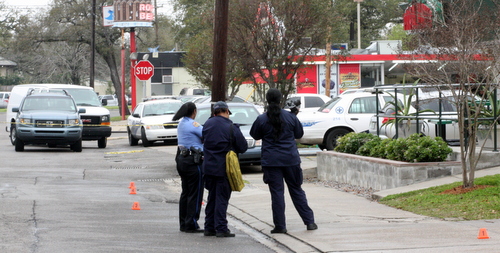