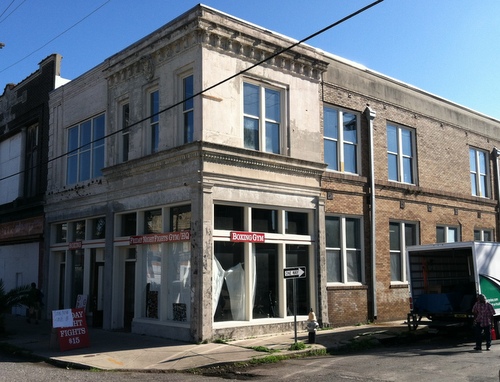 The gym is relocating to O.C. Haley. (photo by Jean-Paul Villere for UptownMessenger.com)

The invention of gunpowder was an accident. So was plastic. Viagra too. The reinvention of Freret similarly so. Despite decades of best efforts of local government, administration pledges, and the citizenry alike and at large, Freret couldn’t get any measurable play until after Katrina. But to be clear, no one thing has made Freret what it is today. It has taken a village, um, of events, so to speak. But let’s start with the birth of the Freret Street Boxing Gym, established seven years ago. At the time, Freret’s business offerings were basically tattoos, red beans and hardware. Today, as it has been for decades upon decades, the hardware store is still there. But not the tattoos. And not the red beans, either. And, as of the last month, the gym has moved as well — to O.C. Haley Boulevard.

Among the many truisms in real estate, ‘highest and best use’ defines what happens, to what degree and ultimately where. When Mike Tata opened for business on Freret, the floodwaters of Katrina quick on his arrival did not wash him away. Instead, as the city recovered, he began to hold a monthly event that quickly caught on and brought new attention to the corridor. Friday Night Fights, once held inside the gym, in short order reached a capacity following and to accommodate further growth was moved outdoors to the nearby city-owned parking pad. There the fights were held for years, until recently the building Mike was leasing sold. Under new ownership the rent would now be higher, so Mike politely declined and found new digs at O.C. Haley and Euterpe, directly across from Cafe Reconcile. 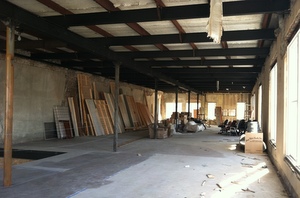 The interior of the gym's new space. (photo by Jean-Paul Villere for UptownMessenger.com)

Personally this change to me remains somewhat bittersweet, for selfish reasons, as I live two blocks from where the fights were held; I absolutely loved seeing this monthly madness take place. But, being in real estate, I fully understand that use evolves. And while Freret has garnered a relatively quick reputation for excellent local businesses heavy on restaurants, the traffic that the gym brought will now seed the O.C. Haley corridor, a change that arguably will be marked as a tipping point for unsure investors and homebuyers. No longer need anyone wonder if O.C. Haley might one day be great again. It’s happening. Right now. The gym is being reborn in an old bricked two-story corner facade retrofitted with new I-beams and concrete, and it’s gorgeous. The fights too will return shortly after the end of Carnival season: first, one indoors to celebrate the new space, then future outdoor ones to be held at a to-be-determined nearby site. 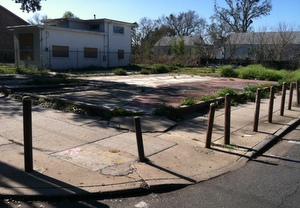 The site of the former Brown Derby corner store. (photo by Jean-Paul Villere for UptownMessenger.com)

But Freret’s rebirth may not be easily handed over to one single success story like Mike’s, nor to those who came in afterward and refurbished old buildings and started new businesses. Or even the monthly Freret Market. The dynamic goes much deeper. But you have to know your history. The Brown Derby once stood at Freret and Louisiana, a landmark corner store not known for much more than being just that – a corner store. It burned down some time in the Katrina void and has not been rebuilt. Rumor mills aside, having the Brown Derby not rebuilt or re-opened changed the visual field and foot traffic of this intersection. And at the other end of the corridor, where Lusher High now sits, the site once operated as Fortier. Before Katrina, when this school let out at day’s end, it erupted into chaos. Each day. So much so that not one but often two squad cars would flank the building in hopes of reigning in the student body. 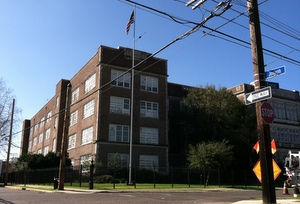 Lusher High School, seen from down Freret at Joseph. (photo by Jean-Paul Villere for UptownMessenger.com)

Call it the perfect storm of events or whatever, but these two independent events of school shift and corner grocery elimination in this writer’s opinion opened up the two entrances to the Freret corridor in ways that no amount of legislation or investment could ever accomplish. They were coincidental, accidental, and in hindsight substantial with unexpected results. Drivers who once locked their doors at red lights on Nashville exhaled. And the sleepy storied set of dilapidated commercial spaces between Napoleon and Jefferson for the first time in forever fostered new looks and inspired investment. Two other noteworthy events also took place: the city changing the corridor’s overlay and the birth of Green Charter School. These of course have contributed to Freret’s resurgence as well. But I would submit these are supplemental plusses and that the advent of Lusher High and Brown Derby’s demise laid the foundation.

Mike Tata now has a 10-year lease at his new location. And Freret’s unfortunate loss is undoubtedly O.C. Haley’s gain. Don’t cry for Freret though. One may expect more examples of highest and best use to come — on both commercial corridors. You see, before Mike took over 1632 O.C. Haley, it was an empty building awaiting its next purpose. Highest and best use applies everywhere, all the time. The rest of story remains unwritten. So what could possibly be next for O.C. Haley? I don’t know. Let’s chew on it for awhile and chat between bouts next month.

22 thoughts on “Jean-Paul Villere: The Freret St. Boxing Gym is no longer on Freret. Discuss.”