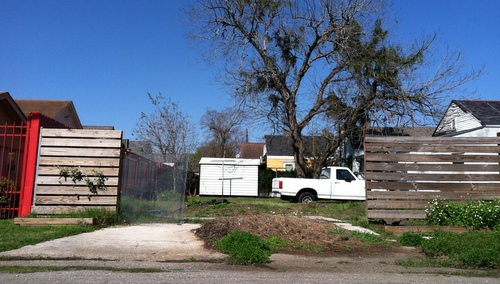 Since a neighbor was ticketed for parking in front of his own house during last year's Mardi Gras, the backyard is his new hiding spot from the meter maids during Carnival. (photo by Jean Paul Villere for UptownMessenger.com)

Greetings revelers!  Two weeks ago I posted 10 points as a basic parade goers guide with some wonderful responses.  This week as we ramp up toward the mania now less than two weeks out, expounding on, otherwise clarifying, and adding a second ten seem in order.

(1) When parking your car, do not park too close to a corner and do not block sidewalks, driveways, or hydrants.  If you question the spot you’re thinking of parking in, chances are your gut is right.  Move along.  And the no-blocking-sidewalks thing is not a joke.  Last year, not one, but two(!) of my neighbors who routinely park across the sidewalk of their own driveways were ticketed.  Their car, their house.  You can argue selective enforcement all you want, but if any car blocks any sidewalk expect the possibility of being ticketed. 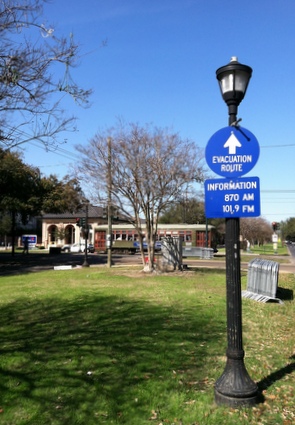 As NOPD barriers begin to go up, perhaps the sign should be changed to "No climbing." (photo by Jean-Paul Villere for UptownMessenger.com)

(2) Lampposts are for lamps only.  And the errant set of beads.  Don’t climb up on or otherwise nest in lampposts or street signs.  Think of it as a viewing opportunity deferred.  Bring a ladder like the rest of us; it’s safe and legal.

(3) Layer.  If you don’t like the weather in Louisiana, wait a minute.  You don’t know what the forecast might bring, so layer for comfort.  But also, should you choose to “participate” in the time honored exchange of throws for exposure, layering may behoove.

(4) Remember the internet.  And should “participation” be your bag, imagine there may be someone or something near you recording either by photo, video, or livestream.  They may even a profit from your behavior.  You might want to run for office one day, or your kids might find it by Googling your name.  Whatever the case may be, unlike Vegas, what happens during Mardi Gras in New Orleans tends to velcro the web.  And with ‘cloud’ technology now, I would imagine viral images might spread even faster.  Do you really want to be a YouTube sensation before the parade finishes rolling?  Likely not.

(5) Keep your pets at home.  Really this just goes to dogs, but if you walk your cat or your pot-bellied pig, do the masses a solid and leave Fido, Muffy, or Babe behind.  They possess zero interest in carnival shenanigans, and it’s safer for them and for you.  If you think it better to bring them if only because otherwise you might have to go home and walk or feed them, spring for boarding.

(6) Throws are for catching.  Not throwing.  Oh yes, it’s all hoots and hollers when you’re ten, unsupervised and that shiny, uncovered tuba stomps by.  Control yourself.  Whether it’s a brass band or any other target, resist the urge to show the world how unlike Drew Brees you are.

(7) Bob and weave.  Expect the unexpected.  The art of snagging prized plastic is as much about reach and technique as it is about avoiding injury.  Until you have been beaned by a set of beads, consider yourself a novice.  And it isn’t so much a rite as it is plain unavoidable given the level of airborn krewe doo.  Plastic cups not so much.  Bags of beads = bag of ice.

(8) Urination happens.  If you don’t have a pee plan, get one.  A parade outing without one is doomed to discomfort.  So grab some singles and either be ready to pay $1 here and there or buy a drink from wherever to use the plumbing.  Failing that, know people who know people who have a toilet.  The greenery along parade route gets enough abuse as it is.

(9) Be cool.  Whether bumping into your ex, that guy you fired last week (or the guy that fired you), or even Dave Matthews (true story), don’t freak out.  They weren’t expecting to see you either.  Be cordial, and be polite.  New Orleans remains the smallest big city, and everybody knows everybody else.  And keep in mind the professional and recognizable musician and film folks (read: stars) are people too.  Often with kids.  That just want to watch the parades like you.  Leave them alone.  They won’t be asking you intimate details about your job or asking to tweet a pic of you and them, so exercise the same courtesy.

(10) Surprise yourself.  Expect that anything might happen during a parade; see (7).  Stash a Band-aid or three in your wallet or purse, just because.  Bring earplugs for you and yours; between sirens and all the bands you may actually want them.  Wear sunscreen; see (3).  Drink less; see (8).  Say please and thank you more.  In other words, in surprising yourself, let carnival reveal the best of yourself whether marching, masking, or spectating.

And that’s it.  Between 101 and now 201, parade etiquette should be well covered.  Have a safe and happy Mardi Gras, all!