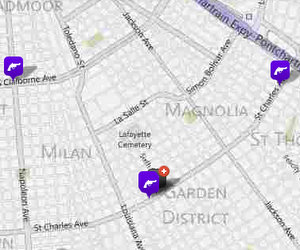 This map shows six weapons cases reported by NOPD on Fat Tuesday along the parade routes, including a cluster of four near Seventh and Eighth streets. (via NOPD.com)

Police arrested a man on the Claiborne Avenue end of the parade route Tuesday for illegal possession of a gun, and at least six other weapons cases were reported that afternoon along St. Charles Avenue.

Shortly after 1 p.m., concerned citizens alerted an Orleans Parish Sheriff’s deputy to a man who had a gun, according to an NOPD news release. The officer saw the “distinct shape of a handgun” in the man’s waistband, stopped him and seized a 9-mm from him, which the officer then turned over to an NOPD Second District officer assisting with the arrest, police said.

Finally, a weapons case was also reported just before 2 p.m. near St. Charles and Erato, near the same location where a double-shooting took place during Thursday’s parades. More details on those cases will be published as soon as they are available.

5 thoughts on “Gun seized from man on parade route at Claiborne; five other weapons cases reported on St. Charles”