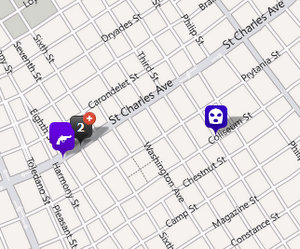 Police seized four handguns within three hours along a two-block stretch of St. Charles Avenue near Eighth Street during the parades on Fat Tuesday, and a man was carjacked at gunpoint several blocks away later that evening, authorities said.

The gun arrests took place between 2 and 5 p.m. as follows, according to NOPD reports compiled by the Sixth District:

Keyon Watkins, 32, was seen in the 3000 block of St. Charles with “a bulge in his waistband consistent with a firearm,” and when officers approached him, he began to run while holding his waistband, the report states. He was caught with a 9-mm pistol on Eighth Street off of St. Charles and charged with illegal possession of a firearm, resisting arrest by flight and parole violation.

Mark J. Phillips, 28, was seen near Eighth and St. Charles lifting his shirt to show a gun in his waistband, the report states. Officers immediately apprehended him and seized a .45-caliber Glock with a loaded magazine, and he was arrested on a charge of illegal possession of a firearm.

A 17-year-old was seen by officers in the 3000 block of St. Charles with what appeared to be a gun in his front right pocket, so they detained him and found a .25-caliber pistol, the report states. He was arrested on a charge of illegal possession of a firearm.

Harold Francis, 32, was seen in the 3100 block of St. Charles adjusting what appeared to be a handgun in his pocket, and when officers stopped him, they found a loaded 9-mm with a full magazine, the report states. He was arrested on a charge of illegal possession of a firearm.

After a news conference Wednesday, NOPD Superintendent Ronal Serpas said he didn’t know of any connection between the cases or other reason why such a small area would show so much gun activity, but credited aggressive enforcement by the NOPD Sixth District for the arrests. Serpas said that in addition to the uniformed, high-visibility officers on the parade route, Commander Bob Bardy assigned other officers around the area specifically to search for guns, resulting in the arrests.

“That’s the kind of stuff we like,” Serpas said.

In a separate case later in the evening, a man trying to rescue an acquaintance’s loose dog from a street in the Garden District had his car stolen at gunpoint, police reports show.

The victim was driving on Second Street near Prytania about 6:45 p.m. when he saw a dog in the street that he knew belonged to a nearby resident, so he parked and went to put the dog back behind its gate, the report states. While he was doing so, a car pulled up at Prytania, four teens got out, and one approached the victim with a gun and asked, “You know what this is?” The man told the gunman to take the car and ran away as both vehicles sped off, the report states.

His car was later found abandoned near St. Bernard and North Miro with a broken oil pan. Detectives lifted several prints from the car, and it was returned to the victim.

Finally, the investigation continues into a Thursday night parade-route shooting near Erato and St. Charles, authorities said. The teen arrested after the shooting is not being charged as the gunman in the incident, contrary to initial reports, and police are continuing to look for a second suspect, authorities said Wednesday.