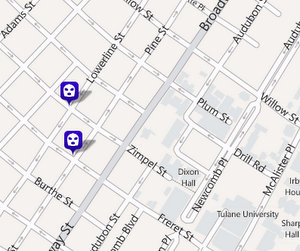 Police investigators believe the latest armed robbery Uptown shows a strong link to a recent case in the same area, and patrol officers are continuing to focus their efforts around the Carrollton-Claiborne area, NOPD officials said at their weekly meeting Wednesday.

Only one armed robbery has been reported so far this week in the Second Distrct — a significant reduction in numbers from previous weeks this year — and it was at 12:11 a.m. Monday at Lowerline and Zimpel, said Sgt. Chris Billiot of the district’s persons-crimes division. In it, two victims were approached by a man who stuck his hand in his jacket, implying that he had a weapon and demanding their cash, Billiot said.

The suspect was described as a 5-foot-10 or possibly 6-foot black man in his late 20s with a bald head and a light skin tone, Billiot said. That description is slightly taller than the suspect in a robbery about a week earlier on Pine Street, but other elements — the implied weapon, the slightly older age and the location of only a block away — all suggest that the two were committed by the same person, Billiot said.

One weekend robbery was also committed by a man with a distinctive description, Billiot said. A victim in the 1500 block of Dante had a cell phone stolen around 9:20 p.m. Thursday (Feb. 2) by a 6-foot tall, 250-pound black man in a red sweatshirt, Billiot said. No other recent robbery suspects have been described as so heavy, he noted: “That’s a description we haven’t had.”

The latest computer-based maps for all three of the Second District’s shifts — day, evening and night — recommend officers be placed in the Carrollton area, primarily along the Claiborne corridor, based on recent crimes and traffic crashes. Lt. Ron Brink of the evening shift said he had been placing a car near Leonidas and Claiborne, because Leonidas is used as a getaway route for criminals in the Carrollton area.

“Hopefully the bad guy will see that we’re there, and choose not to commit a crime because their path of exit is limited,” Brink said.

The computer maps of violent-crime data also recommend the district’s task forces focus on the same area. Task force Sgt. Russell Philibert said that it appears that street signs are disappearing in that area, possibly contributing to the crashes, and the ongoing lack of streetlights makes it easier for criminals to move and hide.

“I don’t know why the streetlights are still off,” Philibert said, noting that he has reported them previously.

Capt. Bruce Adams, the district’s integrity control officer, said he had mentioned the problem to a deputy mayor and hoped to see some streetlights repaired soon.