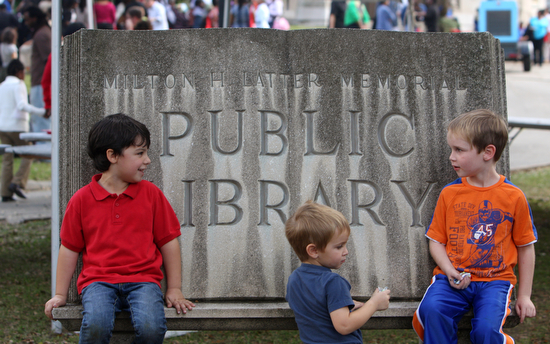 At a crowded meeting at the library on Thursday night, officials gave a progress report on the first phase of the work, executed over the past three years, and offered a timetable of the second phase, slated to begin shortly after a contractor is chosen later this month.

According to Thom Smith of Concordia, Phase I of the work largely entailed repairs to the roof and drainage systems, with additional improvements to the deck and front porch, an iconic aspect of the building. The damage to the exterior stemmed primarily from termite and water damage, Smith said, with the remainder coming “from the normal settling of a 105 year-old building.”

The list of works for Phase II, however, is much more extensive, including refurbishment to nearly every room and floor of the building. Calling for – among other interventions – repairs to the masonry, doors, windows, and fixtures, the renovation of the basement and restrooms and the creation of new storage and staff areas, the expansion of the computer facilities and the replacement of the circulation desk, the design is currently being finalized. Parking at the library will not change, and the historic carriage house, where the Friends of the NOPL hold a twice-weekly book sale, will receive exterior renovation only.

The works will begin in summer 2012, Smith said, and take about a year, with completion estimated for early spring 2013.

Once finished, patrons can expect improved services and décor within the library, said Nikki Cammon of the municipal Capital Projects office, but without the sacrifice of its character. “We’re going to try to stretch the dollar as far as we can to stay in line with the historic features of the building,” she said.

Funding for both phases of the works comes from a $1.5M municipal bond, said Lucas Diaz, Director of the municipal Office of Neighborhood Engagement. Cammon added that to date, about $900,000 has been spent, though she did not have accurate figures to hand. “We do have the funds in place to complete what we presented to you here,” she said. “We also have contingency funding in place so we can cover some unexpected costs.”

These costs had dogged the library in the first phase of the work, when the main air-conditioning unit unexpectedly failed in the summer of 2010, and library officials had to rent an expensive, and disruptive, portable cooling system. The repair to that system, combined with a new round of reviews from the recently-elected Landrieu administration, led to further delays.

Addressing the need for maintenance plans to prevent incidents such as this, Charles Brown, the recently-appointed executive director of the NOPL system, noted that the Library was currently in the middle of a search process for a high-level maintenance manager who would be able to identify future problems and forestall them. Noting the forthcoming opening of five new branches across New Orleans, including the Keller branch Uptown in March, Brown explained that this individual would include the Latter branch within his or her remit, but that such a manager “was not essential for these works to take place.”

Asked about the impact of the works to day-to-day library operations, Cammon said that a certain amount of disruption is inevitable, but that the contractors will strive to keep it to a minimum. “We hope to phase everything in gradually,” she said, citing as an example the temporary closure of rooms or floors, “but we’ll be sure to inform community members of any disruptions in advance.”

Diaz added that a further public meeting will be held with the contractor, once they are chosen. With the selection process due to be finished this month, he said he expects that meeting to follow shortly after.

An additional project, outside the scope of the Concordia project, is the overhaul and improvement of the landscaping around the library, a suite of works valued at $500,000 currently underway. Marianne Mumford of Landscape Images, Inc., the firm hired to execute the work, assured those at the meeting that built into the budget for the landscaping was a ten-year maintenance plan, worth about $215,000 of the total design.

Funding for this design, Mumford said, which is currently at about one-third of the total required, has come primarily from neighborhood residents, foundations, and community groups such as the New Orleans Town Gardeners, which first proposed renovation of the grounds prior to Hurricane Katrina. Lest patrons grow concerned about the loss of one popular feature of the grounds, Mumford was swift to allay any fears.

“You’ll still be able to roll down the hill,” she said with a laugh. “Absolutely.”

Benjamin Morris can be reached at benjaminmorris@nolamessenger.com.