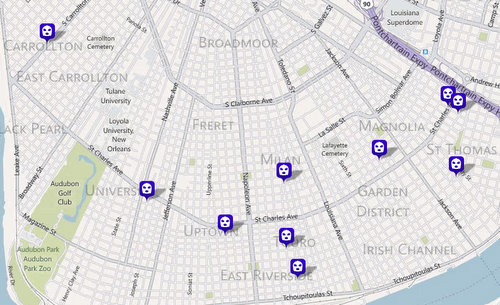 Robberies reported in the Uptown area since Friday, Jan. 13. (via NOPD.com)

At least 20 teenagers have been arrested on robbery charges in the last two weeks, but the surge in Uptown robberies has continued unabated, police officials said Thursday.

One case alone yielded the arrest of a gang of nine teens who were allegedly involved in stealing a man’s laptop as he walked on Prytania Street. In another, a group of teens suspected in a series of Carrollton-area muggings were caught breaking into a house in the Milan area. Other cases involved cross-town car chases and block-by-block manhunts, almost always involving teens not much older than 16 or 17.

“We’re making some good arrests, and putting a lot of people in jail for it,” said Sgt. Chris Billiot of the NOPD Second District persons-crime division. “These youngsters think this is something funny, but it’s not very profitable.”

The largest group of arrests came from a case on Prytania Street last Friday, when a man walking near Valence Street around 6:30 p.m. noticed a large group of teens following behind him, and began to feel threatened, Billiot said. One suddenly ran up and took the man’s computer bag, and the rest scattered, but police were already in the area and quickly caught the one who had taken the computer, Billiot said. He then implicated the others as lookouts, and they were all charged with simple robbery, Billiot said.

Police had previously arrested 17-year-old Latesha Williams in one of a series of robberies along Carrollton Avenue in which a group of teens was repeatedly using pepper spray in the muggings. Several other teens were suspected in the case, and on Jan. 12, officers responding to a report of a burglary in progress in the 2500 block of Amelia saw four teens actually attempting to pull iron bars off the window — including several of Williams’ suspected associates, Billiot said.

After her booking photo appeared on UptownMessenger.com last week, citizens have reported seeing Williams walking in with a group of male teenagers in at least a three-mile range around Uptown, Billiot noted.

In yet another case, three teen girls robbed a woman of her cell phone Tuesday afternoon at Arabella and Hurst streets, Billiot said. Police chaplain Joe Cull happened to be nearby, saw girls matching the description and followed them until officers arrived, leading to their capture, Billiot said. But in that case, only the girl actually identified as the one who took the phone was charged, because the other two did not appear to have known she was going to do it, Billiot said.

That group, Billiot said, appeared to have taken the streetcar line to the neighborhood prior to the robbery.

In the 700 block of Austerlitz on Sunday evening, a man was robbed of his car, but Sixth District police quickly caught sight of it and followed it over to Elysian Fields, where it was ditched, said Lt. Troy Savage of the NOPD Sixth District investigative unit. Police found and arrested two teens, 18-year-old Anthony Gioustovia and 17-year-old Mitchell Esteen, Savage said.

On Monday, a woman getting off of work from Touro Infirmary was walking home in the 3600 block of St. Charles when she was approached from behind by a man who hit her and then grabbed her purse, Savage said. A bystander saw her in distress and followed the attacker onto Delachaise Street, and police were able to set up a perimeter around the block until they found him. James Tucker, 20, was charged with purse snatching and simple assault, according to jail records.

Early Thursday morning, a woman was getting a piggyback ride from a man in the Lavin-Bernick Center lawn on Tulane’s campus, when someone grabbed her off his back from behind and stole her purse, campus police officials said. They were able to track the woman’s iPhone, however, to a white Buick that officers found in the 1400 block of Joliet. After a brief chase — tracking the phone up Carrollton Avenue during the pursuit — NOPD officers assisted in stopping the vehicle on Marks Street in the Dixon neighborhood and found the cell phone inside.

That suspect, identified as 27-year-old Jonathan Bonilla, has been charged with possession of stolen property, said Tulane Police Capt. Donald Saucier, as the investigation continues into the robbery itself. Based on statements he made to the arresting officers, campus police have also asked the Department of Homeland Security to investigate his citizenship.

Police are also actively investigating several other robberies that have yet to be solved, officials said.

On Sunday morning, two victims walking near Carrollton and Oak were robbed at gunpoint by a suspect with a fairly distinctive description, Billiot said. Their assailant was a black man in his 30s with freckles and dreadlocks, about 5-foot-10 and 160 pounds, Billiot said, and he used a phrase that hasn’t been heard in other robberies: “If you try anything I’ll light you up.” Though he ran past several Oak Street businesses as he left, police have yet to find any video imagery of him, Billiot said.

On Jan. 13, a woman was threatened at knifepoint but may have averted a robbery with her screams, Billiot said. She was walking her dog that evening in the 5500 block of South Saratoga when a stranger walked up, asked how old her dog was and whether the dog bit, Billiot said. The man bent to pet the dog on the head, then pulled a knife from his pants leg and told her not to say anything, Billiot said, but she screamed and the man ran off.

Another dog-walker was robbed Sunday evening as he took his Yorkie out in the 4000 block of Chestnut. Savage said investigators are in the process of obtaining video that may lead to an arrest in that case.

Two robberies were reported Jan. 13 and 14 on Thalia Street on opposite sides of St Charles Avenue, but the descriptions of the incidents were quite different, said Sgt. Sabrina Richardson of the NOPD Sixth District investigative unit. In one, the victim was leaving a daiquiri shop when a man approached from behind with an implied weapon and demanded the victim’s belongings, then ran off on foot. In the second case, a victim parked and walked to Popeye’s, realized it was closed, and then turned to leave when a car pulled up and a man with a black handgun jumped out, Richardson said. The victim dropped his cash on the ground and then ran off, Richardson said.

Also on Jan. 14, a victim leaving a bar on St. Mary Street in the Lower Garden District in the early morning hours was robbed at gunpoint, Richardson said.

The Second and Sixth Districts — which together run from the U.S. 90 overpass to Jefferson Parish, covering all of Uptown New Orleans — averaged a total of about three or four robberies a week over the last two years, statistics show. But in the last week alone, 10 robberies were reported, according to the current crime maps — despite all the recent arrests.

“It was a really rough week,” Billiot said.