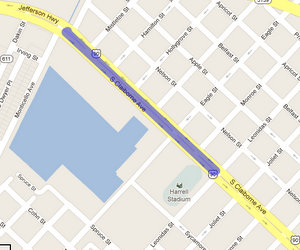 The creation of a new drainage canal under the neutral ground along South Claiborne is expected to take the next two years.

The construction of a $27 million new drainage canal under the South Claiborne neutral ground in the Carrollton area is slated to begin within a few weeks and last until July 2014, officials said.

The new canal from Leonidas Street to Monticello Avenue is part of the the Southeast Louisiana Urban Flood Control Project that will also lead to major upcoming drainage work on Louisiana, Napoleon and Jefferson avenues.

The Sewerage and Water Board of New Orleans and the U.S. Army Corps of Engineers are holding an informational meeting for residents at 6 p.m. Thursday at St. John Baptist Church, 8540 Panola Street.

The project is funded with 65 percent federal money and 35 percent from the SWB.

More information is available at 585-2450 or http://www.swbno.org/work_drainageSELA.asp.