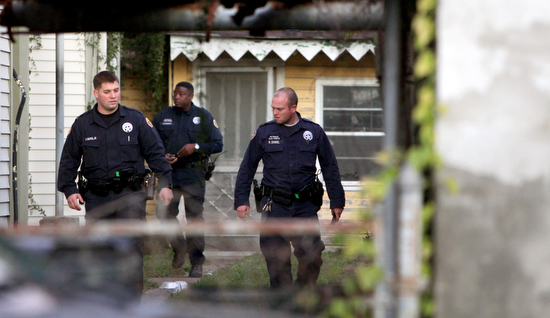 Police leave a home on the 600 block of Peniston St. after searching for an armed robbery suspect underneath, inside and behind the home late Monday afternoon. (Sabree Hill, UptownMessenger.com)

A man who allegedly robbed a woman at gunpoint on her doorstep early Monday morning was spotted again walking nearby later in the day, leading to his arrest after a two-hour manhunt that shut down the 600 block of Peniston and several surrounding streets in a small corner of Uptown that struggles with an inordinate amount of gun crime.

The man approached the victim with a gun at her doorstep shortly after 5 a.m. in the 500 block of Austerlitz and demanded her money and her shoes, she said in a brief interview after the manhunt concluded. She had seen him hanging around the neighborhood recently and tried to reason with him, she said, but he insisted on robbing her.

Later Monday afternoon, she noticed the same man walking again, and she called police with his location. A chase ensued, and the suspect disappeared into the block surrounded by Peniston, Annunciation, Amelia and Laurel, so police surrounded the block, shut the streets down and began searching from house to house with a police dog, looking under homes as well as using a ladder to look on the rooftops.

Finally, they found the man hiding on a rooftop in the 600 block of Peniston and brought him down on a ladder, and as he was walked to a waiting patrol car, the victim said she recognized him. He was later identified as 22-year-old Sedrick Simms, and charged with armed robbery and resisting an officer, according to jail records.

The victim’s mother, Darlene Currington, said she was relieved to see him captured, because they were afraid that he would retaliate against her daughter if he was not located. The arrest, she said, restores some of her faith in the city police — whom she said she was beginning to regard like the Saints in years past.

“I was really worried,” Currington said. “I’ve been up since early this morning, because I just felt like something was going to break. But I was really surprised they (the police) stayed as long as they did.”

Lauren Thomas, a Peniston Street neighbor, said the area’s problems used to stem from the 700 block of her street, but have since moved to Annunciation — where two men were gunned down last month. The neighborhood has just been transferred from the NOPD Second District to the Sixth, and Thomas said their persistence Monday gives her some confidence in the transition. 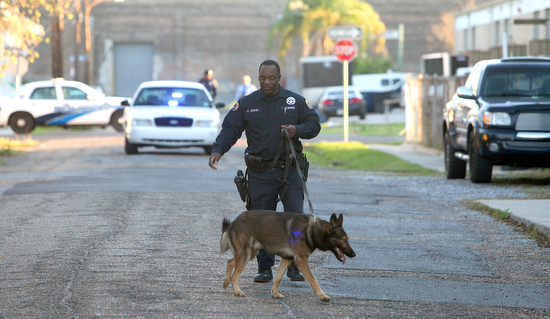 An officer and a police dog search for a suspect in an armed robbery while on Amelia St. late Monday afternoon. (Sabree Hill, UptownMessenger.com)