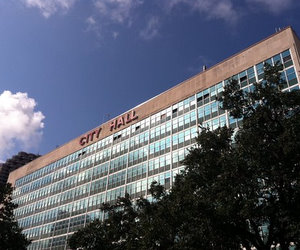 Neighbors concerned about the future of two large Uptown properties near Audubon Park — an apartment complex on Tchoupitoulas and a mental health facility on Calhoun — received hopeful signs Tuesday night that the city is inclined to prevent major changes to either of them.

In their formal recommendations to the City Planning Commission, the planning staff concludes that the DePaul mental health facility retain its current land-use, low-density residential — a decision that drew from its immediate neighbors. The apartment complex at State and Tchoupitoulas is recommended for a medium-density residential land-use to promote its redevelopment as another apartment complex, which would assuage neighbors’ fears of a commercial project there but still leaves questions about how much density would be permitted, they said at a Tuesday evening public hearing.

The 12-acre DePaul campus between Henry Clay Avenue and Audubon Park (also known as the Children’s Hospital Calhoun Campus) had originally been given an “institutional” future land use by the city staff, but City Councilwoman Susan Guidry asked the planning staff to review that decision. Neighbors of the site have been arguing for months that the site is residential in character, and that its official designation should not allow for a dramatic build out as a full-service hospital.

“Surrounding area residents contend that while the subject site has supported institutional uses for over 100 years, it has also been observed as a ‘low-key’ neighbor,” the report observes on pages 74 and 75. “Retaining the land use designation of Institutional would allow the owner all entitlements under that designation including future zoning classifications which may not fit harmoniously with the adjacent Low Density Residential and Parkland and Open Space areas.”

Accordingly, the city staff recommends changing the future land-use of the site from institutional to residential low-density — which actually does allow the continued operation of the mental hospital there in its current form.

“The staff believes retaining the adopted Institutional designation would afford the site owner future development options which may not be in keeping with the surrounding area,” the report concludes. “Given the site’s location along minor streets that cannot handle heavy traffic, the future needs of the owner should not over-ride the needs of the surrounding low-density neighborhood.”

The points essentially echo a presentation by the Upper Hurstville Residents’ Association last month, and the staff recommendation brought leaders of that organization, the neighboring Audubon Area Zoning Association and Audubon-Riverside Neighborhood Association, and a handful of individual residents to praise it and urge its adoption.

“The staff recommendation is right on point,” said neighbor Bill Ryan. “Any future development of this property will completely denigrate this neighborhood as a residential neighborhood.”

Developer Ben Gravolet had requested the “mixed use, medium density” land use for his apartments at State and Tchoupitoulas, which would have allowed “future redevelopment of the site for mixed-use, including commercial, retail, and office services,” according to the planning staff report. The roughly 2-acre site with about 12 apartment buildings is currently designated “residential low-density,” and the staff recommended increasing the density, but maintaining the residential use.

“The request of Mixed-Use Medium Density would not be in keeping with the primarily residential development pattern fronting Tchoupitoulas St. from Arabella St. to Audubon Park excluding the LSU Health Services Center – Uptown Campus and Children’s Hospital sites,” the report states on page 71. “Therefore, the staff believes that the existing multifamily development would be best captured under the range of uses within the Pre-War Residential Medium Density designation.”

The prospect of commercial redevelopment drew about nine ardent opponents Tuesday evening. Pat Williamson said she represented the “Keep Tchoup Residential campaign,” a grassroots effort of about 150 immediate neighbors organized specifically to oppose the change. Neighbor Kris Pottharst and Betsy Stout of the Louisiana Landmark Society both argued that the section of Tchoupitoulas has received substantial investment to get the 18-wheelers off of it, and that it is now “purely residential” other than the two hospital properties.

Sara Meadows Tolleson of the Audubon-Riverside Neighborhood Association said her organization prefers the original “low-density” designation to the “medium density” recommendation by the staff — low density would still allow multi-family development, she noted. While staff members acknowledged the point, they said the current apartments aren’t built in a way that would suggest preservation, and medium-density would ease the path to redeveloping the site.

Commissioners said they heard more opposition to the commercial use than the increased density, and asked if that was the case.

“I think the intensity of the commercial would be outside what people would be comfortable with,” Tolleson said, but reiterated the association’s preference for the low-density land-use.

“We really appreciate the fabric of the neighborhood as residential,” added another speaker, Tchoupitoulas resident KiKi McIntyre. “I’m definitely opposed to the mixed use. I’m definitely for the low-density. I’m a little apprehensive with the medium-density recommendation. I think as it stands right now, the number of residents living there right now is fine.”

Tulane requests | Tulane University had made a number of requests for land-use changes around its Uptown campus. The planning staff recommended granting a handful with one modification (the Uptown Square area between Broadway and Leake: Tulane had requested mixed-use, high density, but the staff suggests mixed-use, medium density), but rejected about 10 other requests to change individual, mostly residential properties to Institutional zoning for a variety of projects.

“The staff is concerned about piecemeal encroachment of the university into the adjacent residential area; a campus plan should be submitted,” the report reads on a number of items.

The rejected requests brought some frustration from Tulane officials, who said such a decision would limit the university’s use of properties it already owns and operates. The staff recommendations drew a handful of praise, including from Audubon Boulevard resident Maura Sylvester, who said the areas should remain “”neighborhoods first and foremost, not extensions of the university.”

No votes were taken on any of the proposals Tuesday night; those will be scheduled for another meeting in February.