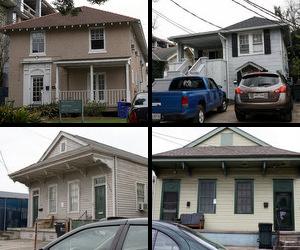 Top: 7008 and 7016 Zimple, both owned by Tulane, were cleared for demolition. Bottom: A request to demolish 5514 and 5518 Tchouptioulas was denied Tuesday. (all photos via Preservation Resource Center, blog.prcno.org)

A pair of homes next to a carwash on Tchoupitoulas face a steeper path to commercial redevelopment after a request for their demolition was denied Tuesday.

With little to no opposition, however, the city did approve demolitions of two homes owned by Tulane University to make room for an expansion of the library, as well as part of the Booker T. Washington school on South Rampart and a caretaker’s cottage at the former LaSalle school being redeveloped near Audubon Park.

Tchoupitoulas | The two homes in the 5500 block of Tchoupitoulas are owned by Uptown Carwash, said attorney Justin Schmidt. The reason for the demolition request is so the lots can be redeveloped into separate commercial sites adjacent to the carwash, though Schmidt declined to name prospective tenants while negotiations are ongoing.

That plan faced opposition from both Michelle Kimball of the Preservation Resource Center and Betsy Stout of the Louisiana Landmark Society (and also a resident of nearby Nashville Street). Both argued that the homes create a buffer between the commercial development on the other side of Jefferson Avenue, versus the residential area between there and Children’s Hospital.

“When these big commercial developments came in initially, the residents were assured at the time that those other little houses were going to remain,” Stout said. “They contribute so much to the character of the neighborhood.”

Schmidt replied that the new businesses would actually enrich the neighborhood, and that they would help take pressure off of Magazine Street, but the Neighborhood Conservation District Committee sided with the residents by a vote of 5-2. The decision can be appealed to the City Council.

Tulane construction on Zimple | Tulane’s plan for two houses on Zimple Street is to use the space their demolition would create to assist in the construction of a two-story addition to the Tilton library. The closest property, where the Tate house currently sits at 7008 Zimple, will be a staging area for construction materials that the cranes can access directly. The other house at 7016 Zimple, now home to offices related to Tulane Law School, will become space for the contractor’s trailers and machinery, said project architect Brian O’Malley of VergesRome Architects.

Committee member Lily McNee of the Historic District Landmarks Commission scrutinized the proposal, asking several questions as to whether the library could be expanded without tearing down the homes. Kimball also noted that there had been no outreach to the surrounding neighborhood on the idea, but the committee voted 5-2 to allow the demolitions.

Booker T. Washington school | The Recovery School District received permission from the committee for a partial demolition of the shuttered Booker T. Washington on South Roman to begin rebuilding there. What will be preserved is the auditorium and the three-story entryway, said a consultant on the project — but the rest of the first floor is in the floodplain and couldn’t be used anyway.

With the “full support” of a representative from the Booker T. Washington alumni association, the NCDC voted unanimously in favor of the project.

Instead, the Preservation Resource Center will be given the opportunity to salvage any re-usable materials, and then the cottage will be demolished to make room for parking on the site and two additional single-family homes, Schmidt said. He brought a letter of support from the surrounding Upper Hurstville Residents’ Association, and the proposal was unanimously approved.

2 thoughts on “Demolition denied for homes next to carwash on Tchoupitoulas; granted for Tulane, Booker T. Washington and LaSalle school properties”