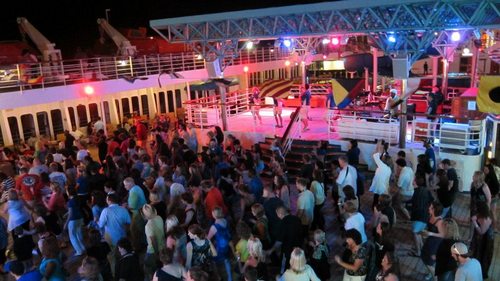 Line dancing aboard the Carnival Elation. Yes, people apparently still do that. (Photo by Christy Lorio for UptownMessenger.com)

Cruise ships are weird things, like a cross between a resort hotel and an airplane. It serves the purpose of being your method of transportation, lodging, dinner, and entertainment, all rolled into one. They are also vessels of pure gluttony and relaxation, yet it somehow maintains a sense of adventure.

I just got back from one, my first actually, last week. I was leery of going on a cruise, no doubt. About 8 years ago I found David Foster Wallace’s book  A Supposedly Fun Thing I’ll Never Do Again: Essays and Arguments in a used book shop. In it there’s a detailed account (in an essay of the same name as the book) that perfectly sums up the cruise experience, albeit in the most cynical of ways. It’s a hilarious, accurate, and a damn good read. Since I can’t top what Wallace wrote, I’ll leave you with my travel diary to peruse instead. 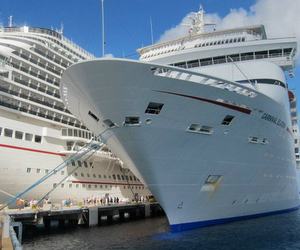 The Carnival Elation, next to an even bigger boat. (photo by Christy Lorio for UptownMessenger.com)

I’m not the type that enjoys manufactured fun.

Sedentary. Nothing to do yet everything to do as well. Eating, sitting down to watch corny shows.

Assigned seating at dinner. Dining companions scoffed at our choice to hit the gym, something we goaded ourselves into almost everyday. They were all from Alabama. We didn’t talk about football.

Even though you are supposed to have “the time of your life,” a 2 a.m. dip in the hot tub was cut short when we found out that limitless fun has its limits. They close the tubs down at midnight, but there is 24/7 pizza and ice cream.

Line dancing. People still do that?

Would recommend going {on a cruise} with other people, would be far more entertaining. Felt far too out of my own element to enjoy. 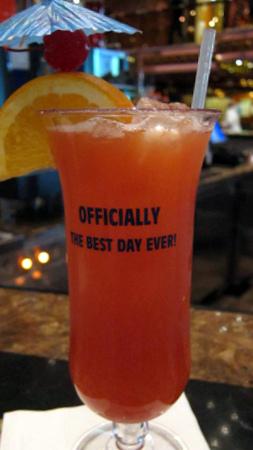 Acclimated to the environment, not feeling quite so cynical about the entire experience. Most people seem to eat, drink, and that’s about it. Haven’t been to any of the shows.

Got really, really sea sick. Felt every slight rocking motion. Bring motion sickness pills, take at first symptoms. We were incapacitated for hours, had to call room service to bring us four pills at $3.29.

Initial thoughts on Progreso: very poor. It’s embarrassing how we have a wealth of riches and complain about it in the USA.

I couldn’t quite enjoy Progreso w/o feeling a pang of guilt. All of these people hustle for pennies, can’t even eat dinner in a restaurant without someone peddling their tourist trinket wares. Also the peddlers were obnoxious, but then you feel guilty for being annoyed since this is how they are earning a living.

Women offering massages for $10-$15 an hour. Didn’t get one, probably should have considering the cruise charges $150. Didn’t get one of those either.

Back on the boat, sunset was incredible. It was so neat watching the sun dip below the horizon. The colors were intense, like a painting.

Dinner. Racist comments from our dining companions. One couple thought it was a big deal to be the only white people in a bar. They also made racist comments about Indian magician on cruise smelling like curry. Skipped dinner the next night. 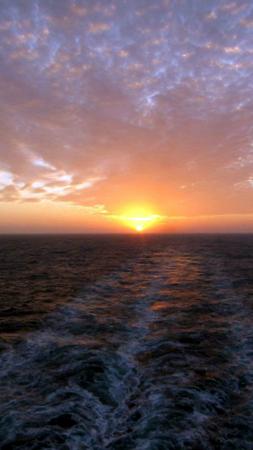 A highlight. (photo by Christy Lorio for UptownMessenger.com)

Similar to Florida, water is beautiful, don’t feel guilty to be on vacation. Usually prefer an adventurous vacation but sometimes it’s fun to play tourist as well and not rough it in a tent.

Hubby thought it would be a great idea to walk aimlessly. Don’t do it! Finally asked a cab driver to take us to the nearest public beach. Beach was free w/ a $10 purchase at the restaurant. Were starving and in need of liquid fun so this wasn’t a problem. Close out your tab right away- ordered 2 entrees and 5 drinks which totaled $100 USD and blew all of our pesos that we had. Stupidly didn’t bring any debit/credit cards either. Had to get a taxi ride, go back on ship, hit up an ATM to pay. Such a hassle.

Back on boat, skipped dinner and gym, took a long nap. Something about the rocking of the boat lulls you to sleep. Dance party on pool deck later that night. Line dancing, conga line- pretty cheesy but people were enjoying themselves.

Slept in, watched TV until noon. Stateroom (aka your hotel room) didn’t have a window so it was basically a cave. Slept well, but weird not being able to see natural light. If we do this again will definitely get a room with at least a porthole, one with a balcony would be preferable.

Watched TV show about scaling Mount Everest. Decided that risking death to scale the highest mountain just isn’t worth it.

Actually ate at lunch time, long lines everywhere for mediocre food. Can’t imagine working on one of these ships and having to eat the same stuff for eight months.

For 2,700 cruisers there are only 5 hot tubs. A couple was talking to some kids in the hot tub about just getting off of probation after being on house arrest.

Last dinner. Thank God our regular dining table was packed so we were placed next to some hipper couples. Got to talking, figured out we were all stalking the same passenger w/ one epic mullet.

Last night at Jekyll & Hyde nightclub- lots of people tearing up the dance floor, including a family.  Pretty fun, good to see people legitimately enjoying themselves.

Customs employees back at port are extremely rude, only encountered one nice guy.

Cruise is over, kind of sad that vacation is ending. Kind of awesome that we live in a port city and just have to take a cab back to our house. Parking at the cruise terminal is $80, round-trip cab ride was about $30 from Uptown.