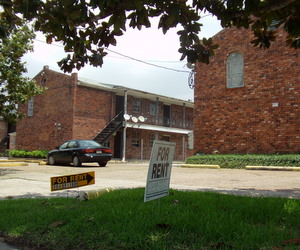 The apartment complex at State and Tchoupitoulas, photographed in August. (Robert Morris, UptownMessenger.com)

The effort to “Keep Tchoup Residential” (as the yard signs say) will get a public hearing next week, when one Uptown neighborhood group plans to ask for land-use rules that will prevent a large apartment complex from undergoing any sort of commercial transformation.

The city’s Master Plan calls for a “residential low density” future land use for the property at State and Tchoupitoulas streets where an apartment complex now sits. Owner Ben Gravolet has submitted a request that the designation be changed to “mixed-use medium density,” which neighbors worry will open the door to any sort of redevelopment.

The Audubon-Riverside Neighborhood Association has already drafted a letter asking that the residential land-use be maintained, though members were in favor of increasing the density so that the property could remain apartments. A public hearing on proposed changes to the master plan is scheduled for 6 p.m. Jan. 10 at City Hall, and association president Sara Meadows Tolleson said it would likely be worthwhile for her to reiterate the request in person, especially since Gravolet’s attorney personally presented their proposal at the last hearing (see the live coverage portion of the article, starting just the 5 p.m. mark).

“We do not want the more intense commercial use they are asking for,” Tolleson said at the association’s January meeting Tuesday night.

With a light attendance just after the holidays, and little that needed urgent attention, the association used the relatively quick meeting Tuesday to lay the groundwork for several other ongoing projects.