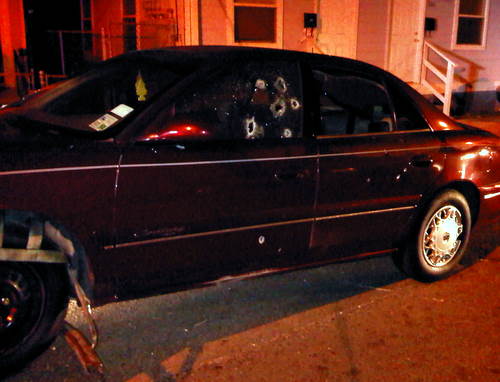 Bullet holes are visible in the vehicle where two men were sitting when they were shot to death Wednesday night on Annunciation Street. (Robert Morris, UptownMessenger.com)

Two men were shot to death Wednesday night on a small stretch of Annunciation Street plagued with a persistent gun violence that has defied any efforts by police or residents to control it.

The two men were in a burgundy Buick Century in the 3900 block of Annunciation about 7 p.m. when they were fired upon by a group of gunmen in a dark-colored truck, said New Orleans Police Department spokeswoman Hilal Williams. The Buick then apparently started forward, but crashed into another car parked on the opposite side of the street, police said.

The passenger was found dead in the car, and the driver died on the way to the hospital, Williams said. The passenger has been identified as Terrance Barber, 27, and the driver was Jamal Phillips, 28, according to nola.com. Police said it was unclear whether the men actually lived in the area, but that they did appear to have a connection to it.

Annunciation Street for about three blocks around General Taylor and Peniston streets is a deadly anomaly in an otherwise tranquil New Orleans neighborhood. Over the past six months, the short stretch has seen a murder in August, a nonfatal shooting in October and separate reports of discharging firearms in three other incidents. In the 50 surrounding blocks between Louisiana and Napoleon avenues on the river side of Magazine Street, only one other gun crime was reported in the same period.

Neighbors to the violence complained to police during the summer about crowds of gun-wielding men who gathered on the street in that area, and several undercover teams were sent to investigate, officials with the NOPD Second District said at the time. The investigators did not observe evidence of drug or gun activity, however, and the officers were reassigned to other hot spots in the district.

Councilwoman Stacy Head began soliciting the neighborhood for information about problem properties herself after the latest shooting in October, but has yet to take any public action on the issue. The entire area is now slated to be moved into the neighboring NOPD Sixth District.

For about two hours after the shooting, a large but mostly quiet crowd gathered behind the crime-scene tape to watch the investigation, including a handful of children playing in a vacant lot nearby. An ATF agent with a police dog searched the scene for evidence around the street while police prepared the Buick to be impounded, its driver’s side windows and doors riddled with at least a dozen bullet holes. 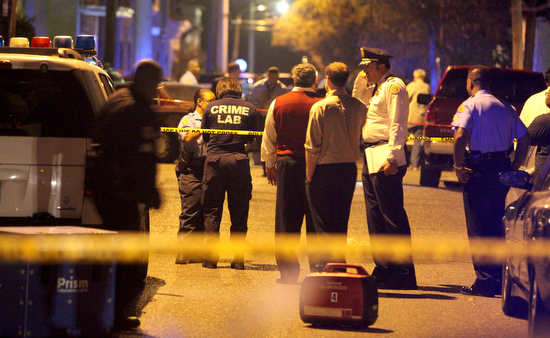 5 thoughts on “Two killed on violence-riddled block of Annunciation”