A rendering of the proposed football stadium on Tulane's Uptown campus. (via TulaneStadium.com) 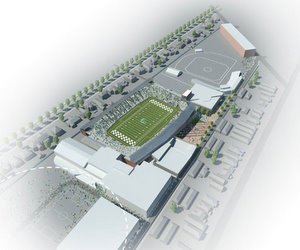 The stadium will be located behind the baseball field, about a block off South Claiborne Avenue. (via TulaneStadium.com)

Tulane University plans to open a $60 million football stadium in 2014 on its Uptown campus, about a block off South Claiborne Avenue behind the baseball field, officials announced Thursday.

The new facility will seat 30,000 people in what the university is calling a “Community Stadium,” relocating Green Wave football back to the Uptown campus after 36 years in the Superdome and creating a new space for the university’s athletics outreach programs.

“More than 20 Orleans Parish public schools currently share two stadiums in the metro area. The Tulane Community Stadium could dramatically ease this burden while introducing youth to the college experience beyond sports,” the university says on a new website about the project, TulaneStadium.com. “Local high schools will have access to playing games at the Tulane Community Stadium, which serves their facility needs and also provides a connecting point to Tulane for high-school students and their families.”

The website also offers a section for Frequently Asked Questions, some of which begin to address concerns that will surely be raised by neighbors in the surrounding residential areas of Calhoun and other streets. On parking, for example, the site promises that “some parking will be available based on priority ranking for season ticket holders and TAF donors,” and that the university has commissioned a traffic study in hopes of minimizing the parking impact. The stadium will also have lighting for night games and TV broadcasts, the site notes.