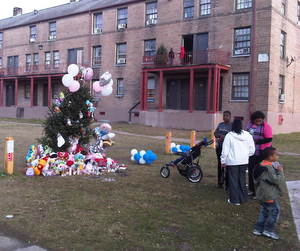 A Christmas tree decorated with toys and candles stands in the courtyard of the B.W. Cooper projects on Erato Street, where Kiera Holmes was shot to death Sunday. Mourners observed her birthday Thursday in a small gathering around the tree. (Robert Morris, UptownMessenger.com)

A toddler killed in the crossfire of a Central City shootout was remembered Thursday afternoon with a small memorial on what would have been her second birthday, and she was buried Friday morning in a funeral ceremony that attracted city leaders and hundreds of mourners.

Kiera Holmes was shot to death Sunday in a flurry of gunfire from two cars intended for a 19-year-old man, Emmett Allen, who ran into the courtyard with the gunmen driving behind him, police have said. Allen remained hospitalized in critical condition throughout the week, police said.

Two of the alleged gunmen — Narkee Hunter, 23, and Tyrone “T-Bone” Knockum, 21 — were arrested Tuesday and each charged with first-degree murder and attempted murder. A third man, 24-year-old Terrious Owney, was arrested by U.S. Marshals in a town outside Atlanta in connection with an separate alleged attempt on Allen’s life from earlier in the day. Owney is believed to have additional information about the Erato Street case, police have said.

A fourth man, 26-year-old Charles Anderson, was also believed to be involved in the Erato Street shooting, but he was found shot to death Monday inside a home in the St. Roch area.

On Thursday, the date of Holmes’ second birthday, a handful of mourners gathered in the courtyard on Erato Street around a Christmas tree decorated with toys and candles to commemorate her birthday, while others participated in a memorial gathering at a club on Tchoupitoulas known as The Venue.

The funeral for Holmes Friday morning drew hundreds of mourners to a church on Franklin Avenue, including Mayor Mitch Landrieu and NOPD Superintendent Ronal Serpas, according to a report by Michael Luke and our partners at WWL-TV:

The community outcry over Holmes’ death bears a resemblance to the reaction a year ago to the loss of another 2-year-old, Jeremy Galmon, who also became a symbol of the city’s out-of-control violence after his death in a shootout at First and Dryades in September shortly after a second line had passed. Galmon’s father, Jeremy Williams, later became a suspect himself in a number of Uptown shootings, including one that wounded a woman pushing two children in a stroller.