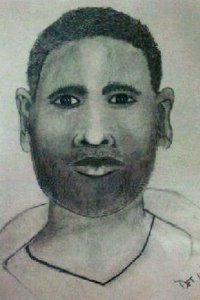 Sketch of wanted subject (via NOPD)

Police have released a drawing of a man who robbed a woman walking along St. Charles Avenue early Tuesday and then tried to grab her, and investigators hope the public can help identify him.

The woman was walking home from the Walgreens store on St. Charles Avenue about 2:45 a.m., and as she approached First Street, she was confronted by a man on a bicycle who demanded her money, said Sgt. Sandra Contreras of the NOPD Sixth District. She handed over her cash, and the man then tried to grab her by the shirt, but she fought him off and he left, Contreras said.

The suspect is described as a 170-pound, 5-foot-10 black man in his late 30s or early 40s, with a dark complexion and facial stubble, wearing baggy pants and “a baggy old dark blue or black jacket with white sleeves and a white letter on the chest,” according to an NOPD alert. His bicycle was a gray or silver beach cruiser-style model.

The woman told investigators Wednesday that she saw the same bicycle on Baronne Street, but police couldn’t find it where she said it had been. A similar bicycle was found chained up about a block away, but the owner was an older man who said he never lets anyone use it, Contreras said.

Detective Reno Bax is leading the investigation and can be reached at 658-6060. Anyone who wants to leave an anonymous tip that could be eligible for a cash reward should call CrimeStoppers at 822-1111.