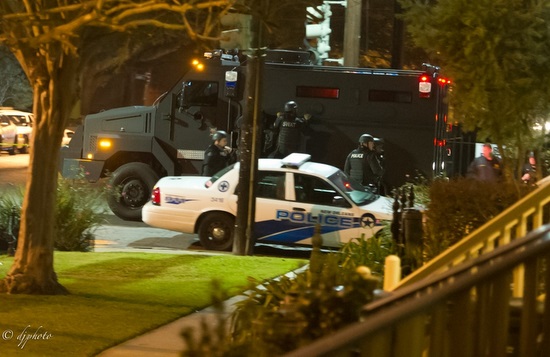 A NOPD Special Operations truck rolls down Magazine Street past Henry Clay Avenue, where the SWAT team is staging during a crisis negotiation with a woman in the 600 block of Henry Clay Avenue. (Photo courtesy of DJ Photo)

After a 62-year-old woman was heard firing gunshots inside her Henry Clay Avenue home Wednesday night, police shut down several neighborhood streets for four hours as they tried to coax her out of the house, but found when they entered that she had killed herself.

The woman’s husband had initially called police to the home in the 600 block of Henry Clay Avenue around 7 p.m., seeking their help dealing with her, said NOPD spokeswoman Hilal Williams. When officers arrived and entered the home, she ran into the bathroom and fired several shots, Williams said. The officers then retreated and called in the SWAT team to begin negotiations, Williams said.

The streets around the block were closed, with several contigents of SWAT officers staging from Magazine Street and at least two armored vehicles on scene. Officers used a loudspeaker to try to communicate with her, but received no response.

“They were trying to get her to come out alive,” Williams said. “In situations like that, you don’t know if she’s going to be shooting at police. All responses like this are very drawn out for the protection of everyone, the officers and the neighborhood.” 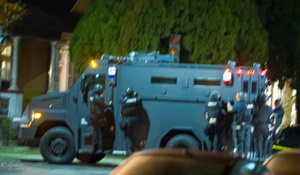 Finally, around 11 p.m., officers entered the house and found her body with the self-inflicted gunshot wounds, Williams said. She had also shot the family dogs, several investigating officers said.

The streets were reopened around 11:30 p.m., though crime-scene investigators and other officers remained at the house well into the night. Just a few houses away in the same block, neighbors Lauren Snider and Emily Schaumburg sat on the porch, reflecting and unwinding after a tense night on what is normally a quiet street.

They were not forced to evacuate, they said, but police told them to stay indoors for their safety. For several hours, they heard the negotiator trying to speak to the woman over a megaphone.

“‘Do you need hospital attention? Let us know if you’re in there.’ They kept saying it over and over,” Snider said, but no response was ever heard from inside the house.

Neither Snider nor Schaumburg knew the woman well, they said, only having seen or waved to her occasionally in passing. They saw her husband, an electrician, much more often, a kind man frequently out walking the dogs.

The Henry Clay Avenue incident is the second crisis situation the SWAT team has been called to in Uptown New Orleans this week. About 4 p.m. Monday, police were called to the 4300 block of South Derbigny to resolve a dispute, and one man went into his house and refused to come out, Williams said. Based on threats he had made, the SWAT team was called, but when he finally responded to attempts to reach him inside the house, he surrendered peacefully, Williams said.