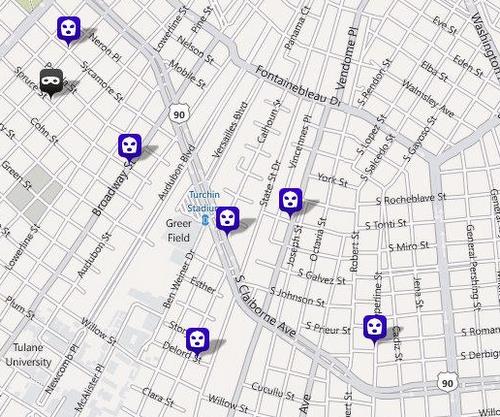 Six robberies and one home-invasion at gunpoint reported in the blocks around South Claiborne since Nov. 29. (via NOPD.com)

Seven armed robberies — including two carjackings and a home invasion — have been reported within sight of South Claiborne Avenue in the university area over the last week, pitting Uptown residents who ventured outside to put out the trash, repair a car, wait for a shuttle or make a cell phone call against gun-carrying muggers on almost a nightly basis.

The most two recent cases took place Monday evening. At 4:22 p.m., the victim was in his backyard in the 5800 block of South Tonti near Nashville Avenue in Broadmoor, working on a truck, when a stranger showed up armed with a silver handgun and robbed him of his keys, credit cards, a cell phone and a $1 bill, according to the report.

About three hours later, a victim in the 6100 block of Delord Street (a small side street between State and Calhoun just off Claiborne) was taking the trash to the curb when a man with a bandana over the lower part of his face and a black gun in his hand, the report states. He demanded the victim’s phone and car keys, then drove off in his white 2003 four-door Mercedez Benz sedan (with a Louisiana license plate of MOA 159), the report states.

And earlier last week, two groups of students in Carrollton — one group on Cherokee, and the other on Broadway — were robbed within minutes of each other Wednesday night. On Tuesday evening, a carjacking was reported on Robert Street in Broadmoor and investigators believe the stolen Honda Accord may have been used the following day in a deadly drive-by shooting just outside Johnson Elementary.

9 thoughts on “Wave of robberies, carjackings at gunpoint over past week along upper Claiborne corridor”