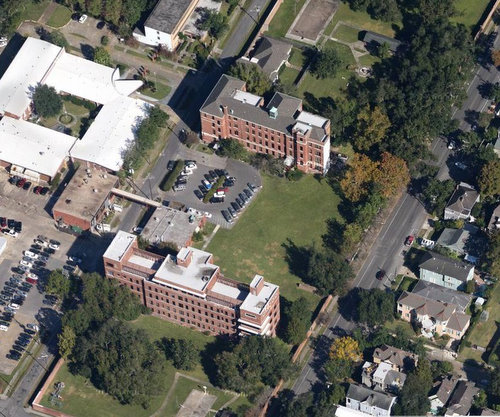 An aerial view of the DePaul medical campus next to Audubon Park in the Upper Hurstville neighborhood. (via maps.google.com)

Concerned that Children’s Hospital might one day develop the tranquil DePaul mental-health campus next to Audubon Park into a full-fledged hospital complex, a group of neighbors made a concerted effort before the city Tuesday to halt those changes before they happen.

Established in 1883, the six-block De Paul site has long kept a park-like character that residents said is appropriate for its use as a mental-health facility.

“Right now it’s a fairly benign neighbor,” said Jay Seastrunk, an architect who lives across Henry Clay Avenue from the site. “Not a lot goes on to impact the neighborhood.”

A proposed change to the city’s Future Land Use Maps in the Master Plan would designate the site for “institutional” uses, however — the same category used for other major hospitals. During a public hearing Tuesday on all the proposed changes to the master plan, Seastrunk displayed aerial photos of Touro Infirmary and Oschner Baptist to show the dense development on the hospitals’ blocks, compared to the spacious, green DePaul site.

How a new hospital would affect Audubon Park should be a citywide concern, neighbors said.

“We’re not opposed to redevelopment of that property,” said Karen Duncan, president of the Upper Hurstville Residents’ Association. “We simply want it to retain low-density.”

Children’s Hospital has said that it bought the property as an investment with no immediate plans for it, and that the “institutional” classification was a suggestion of the city’s planning staff — not a request by the hospital. But when the association requested a meeting, Children’s Hospital replied that it would rather wait until the land-use issue had been decided, according to a letter from Duncan to the planning commission.

In the long-term, the neighbors propose the creation of a custom land-use classification that better accommodates both the medical use of the facility and its quiet character. In the short term, the property should not receive an institutional designation that will give it free reign to redevelop, neighbors said.

“The only solution is to leave it as residential, so the owner of the site would have to come to the neighborhoods to negotiate if they want to increase the use,” said Glenn Adams of the Audubon Area Zoning Association. “It’s been a very low-key, good neighbor historically, and we want to keep it that way.”

No one from Children’s Hospital spoke at Tuesday’s meeting, and the planning commissioners received the comments without reply. Another public hearing on the changes will be held at 6 p.m. Jan. 10.

Other Uptown land-use issues that received comments and some opposition Tuesday were a series of requests by Tulane University and an apartment complex at the corner of State and Tchoupitoulas. To read our live coverage of Tuesday’s meeting, click “Replay” in the box below.