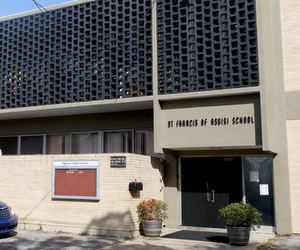 With ample space next year in the new St. Francis of Assisi campus on State Street, Lycee Francais may add higher grades more quickly than it had expected. (Sabree Hill, UptownMessenger.com)

Based on what may be a growing interest in language-immersion education among parents, Lycée Français de la Nouvelle Orléans is exploring the possibility of adding more upper-elementary grades sooner than the one-per-year model that officials had originally envisioned, school leaders said Thursday.

Currently in its first year, Lycée Français has three grades: pre-kindergarten for 3- and 4-year-olds, and kindergarten for 5-year-olds. The original plan for the school called for the addition of a first grade next year, and moving one grade up each subsequent year. Based on repeated inquiries from families with older children, however, school officials are investigating the feasibility of adding some higher grades ahead of schedule, board member Jean Montes said during a special meeting Thursday.

The board’s first step, Montes said, is determining exactly how much demand for opening the higher grades actually exists. The board will be collecting data on that issue during its ongoing application process for the next school year, as well as by filing information requests to see how many children are being turned away from upper elementary grades at other French-immersion schools, Montes said.

“We know there’s a demand for this education throughout the state,” said board member Paige Saleun. “We know that there are immersion programs everywhere, and they’re thriving.”

In theory, Lycée Français could handle the addition of up to about the fifth grade, said school director Jean-Jacques Grandiere. That consideration is based on both available space at the new St. Francis of Assisi campus on State Street, and on the different curricular demands that would be involved in opening a middle school, board members said.

The idea is still in its preliminary stages, and no firm plans or timetables have been set. For example, it is still too early to tell exactly which grades there is a demand for, and whether they could be added next year, said board chair Andrew Abrams. Any change in the growth schedule will first require the recommendation of the state Department of Education and approval from the state Board of Elementary and Secondary Education, he said.

“All we can do is show the demand … and our ability to accomodate that demand,” Abrams said in an interview after the meeting.

Board member Allen Kelly asked how the school plans to handle the French fluency of new students in upper grades. Even a student who comes to the school in the first grade, for example, would be three years behind a student who started at LFNO at age 3.

“We obviously can’t take someone who’s never spoken a word of French and put them in fourth grade,” Saleun said. “They’re set up for failure from the getgo.”

Eventually, the upper grades will require some sort of testing to ensure new students can understand the teachers, board members said. But any plan to add higher grades will also include recommendations for tutoring and other support services for new students, Montes added.

No action was taken on the idea at Thursday’s meeting. Montes said he would have more to report on the matter at January’s meeting.

Thursday’s meeting also included discussion of the contract for students in the school’s early childhood education program. To read our live coverage, click “Replay” in the box below.