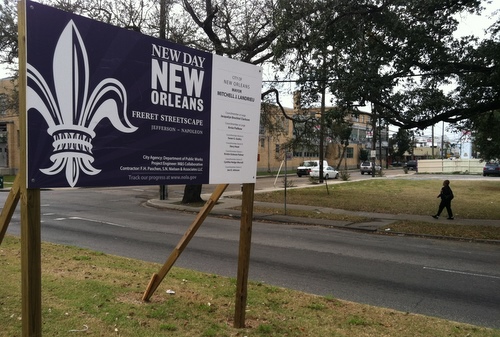 I live and work in the Freret corridor, and for many moons now promises of a new streetscape have been on the horizon.  Most recently, the collective residents and business owners were informed by the city just weeks ago the start date would be some time in early November.  Look at your calendar.  It’s the middle of December, and not a bit of concrete has been disturbed.

So what gives?  Misgivings and misinformation, that’s what.  While informed of the November start time, come to find out now the contractors who then promised diligence and adherence to non-disruptive work with a signed agreement with the city still and presently have no signed agreement apparently; hence, no work.  Puke now, if you like.  Feel better?  I don’t.

First of all, let’s define “streetscape.”  Sounds fancy, no?  It should really say “sidewalks.”  Well, some sidewalks.  And trees.  Or some trees.  And grate removal.  But no street repaving.  None.  Zero.  Nada.  Zip.  Which really contradicts the whole street part of streetscape, because the street isn’t being touched.  When in reality the most challenging part of navigating Freret isn’t its sidewalks, it is in fact its street. 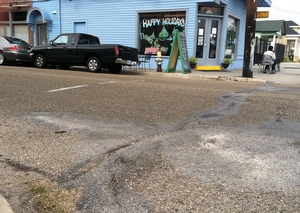 The rift at the corner of Valence Street. (Jean-Paul Villere for UptownMessenger.com)

Pedal much?  I do.  The corner of Valence and Freret on the Uptown/River corner has a wicked rift of a bump, and if you aren’t paying attention, expect to introduce your hindquarters to the asphalt.  Or what was once some definition of asphalt anyhow.  So with a price tag that’s dwindled over many fiscal quarters to just around a cool half million, my question is this: why exactly are paying for something we really don’t need and why can’t this funding be applied to an entire, all encompassing reboot?  I mean it hasn’t even started yet, and the longer it takes, the less sense it makes.

Should we lump it and settle for a bastardized version of a facelift?  Better question, do we have a choice?

Freret has been the golden boy for all manner press of late, and hey, that’s great, but c’mon isn’t a total resurfacing in order?  What irks me more is just yesterday I am sent an email informing me that from the ashes of the early 1990s, the Krewe of Freret is returning.  “We’re getting the band back together,” said Elwood to Jake.  And again, hey, that’s great.  Only we still have these crappity crap crap streets with no hope for nothing in the crystal ball for their resurrection.  I for one could get way more excited about the return of the KofF if only the city wasn’t try to sell me a streetscape that is neither street nor scape.Bleech!