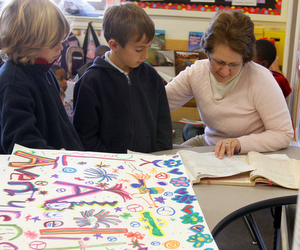 “This is a growth opportunity that fits us perfectly,” said ISL board president Andrew Yon in a phone interview after the decision.

ISL is one of only two new charter operators approved by the Jefferson Parish School Board out of 10 that had applied for next year, Yon said. The exact location of the school may take several months to be determined as Jefferson Parish works through system-wide facilities issues, but the new school is expected to have its doors open next fall, Yon said.

The full-immersion curriculum means that all subjects are taught in a foreign language, either French or Spanish, very similar to ISL’s current offerings at its campus on Camp Street in the Lower Garden District. One significant difference is that — because the new ISL campus is intended to consolidate the immersion programs that already exist in three different Jefferson Parish schools — the new school will open all the elementary grades it can fill in its first year, rather than starting at kindergarten and building a grade each year as ISL is doing with its second campus that opened this year in Algiers Point.

“If we get enough interest in all grade levels, we will open with kids in every grade,” Yon said of the new Jefferson Parish school.

ISL had also applied to take over a struggling Jefferson Parish school that has a high proportion of native Spanish speakers and create a dual-language program there (as opposed to full immersion), but that application was recommended for denial. The evaluation team from the National Association of Charter School Authorizers were skeptical that ISL only has experience opening schools from scratch, not taking over struggling ones, Yon said. Some of those same students may still end up at the new ISL, however, because the only requirement for admission to the upper grades is the ability to speak the target language.

“We would welcome native Spanish speakers at any grade level,” Yon said. “We’re going to be able to show substantial academic improvement for whatever kids we’re opening with.”

Yon said the Jefferson Parish meeting Wednesday had a long and complex agenda that dealt with a number of other matters, so the board spent little time discussing the particulars of ISL’s application. After the NACSA presentation recommending approval for the new school, one current Jefferson Parish immersion-program parent offered some praise for the choice of ISL, and then the board voted unanimously to accept all the NACSA recommendations, Yon said.

One out of four: “A year to hone our game”

The Jefferson Parish applications represented two of four bids ISL made this year for new schools. Two others were for dual-language schools — with English instruction in most classes, but a foreign language class as a subject taught daily — one through taking over a failing Recovery School District campus, and the other chartered as a new school through Orleans Parish. NACSA officials told ISL last week they would not recommend them to take over a failing RSD school for the same reasons it denied a takeover in Jefferson Parish, and Yon said that while no official decision has been made in Orleans Parish, his understanding is that it will meet a similar fate.

In other words, the new school in Jefferson Parish is likely to be the only expansion ISL makes next year out of its four different applications. Yon said that he found the three denials personally disappointing, but said he understood the NACSA team’s reasoning and applauded their conservative approach to the recommendations, which demand that schools show substantial experience in every aspect of their application.

“My personal belief is that they just want to proceed cautiously,” Yon said. “If you’re weak in one area, they don’t think you can make it up in another area.”

Next year, however, ISL plans to apply for the new schools and the takeovers again, and Yon said that the first year in Jefferson Parish will bolster its case. Unlike its current programs, it will be starting multiple new grades at once, taking on students from a variety of other programs. Yon said ISL plans to compile their standardized test scores from their old schools to get an idea of a baseline School Performance Score for itself, so that it can compare their growth, and the new school’s, after only one year.

ISL had never planned to open all four campuses in a single year, anyway, Yon said — had they all been approved, the board intended to spread the four openings over the next three years. That goal, he said, is still well within reach.

“To me, this is hardly a setback. We will be right back in the pipeline a year from now,” Yon said. “It gives us a year to hone our game a little bit and go back into the application process. A year from now, after we have opened two campuses in two years, we will be way better prepared to make an argument that we can handle the additional demand.”