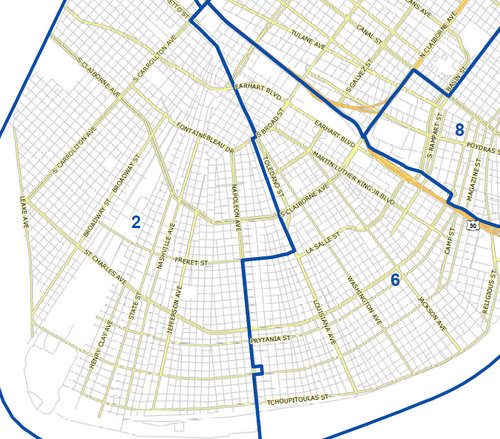 The boundary between the NOPD Second and Sixth Districts will move from Louisiana Avenue to Napoleon Avenue between Freret Street and the Mississippi River after the first of the year. (map via WWL-TV)

A swath of central Uptown with some of the most active neighborhood groups in the city will be patrolled by a completely different set of police officers after the first of the year, when the New Orleans Police Department shifts part of the boundary line between the Sixth and Second districts from Louisiana Avenue to Napoleon Avenue.

The department has been designing the change in district boundaries for more than a year — NOPD Superintendent Ronal Serpas gave an overview of the process during city budget hearings in November 2010. Since that time, the city has purchased new computer software that analyzed the average time spent responding to calls for service in each district — examining both call volume and travel times — and district commanders have engaged in extensive discussion with leaders at police headquarters about where each line should be redrawn.

In the Uptown area, the change will be simple but substantial. For decades, the boundary line between the Second and Sixth Districts has been Louisiana Avenue. Under the new plan, that boundary will move to Napoleon Avenue from Freret Street to the Mississippi River — shifting the Milan, Delachaise, Touro and Marengo neighborhoods in the Sixth District.

(The new boundary line has one exception: the block at the corner of Napoleon of Magazine where the Second District station sits has been carved out of the new plan to remain in the Second District. Replacing the old, deteriorating station house with a new building or a new location has long been a topic of discussion.)

Under this plan, Commander Bob Bardy and the Sixth District will be assuming two trouble spots that have long bedeviled the Second District. The stretch of Louisiana Avenue between Freret and St. Charles is known as the “Louisiana corridor” to both districts, and sees some of Uptown’s most consistent gun violence, often starting on one side and crossing to the other. The other spot is much smaller, just a handful of blocks around Annunciation, Peniston and General Taylor that has been the site of several shootings, gun cases and a still-unsolved homicide this year.

The change in the Uptown boundary will affect between 8,000 and 10,000 New Orleanians living in 5,000 to 7,000 households, according to current Census data. But the officers who patrol the Second and Sixth District may be more affected by a different change: the division of each NOPD District into two “sectors,” each of which will have more autonomy and its own command structure. In the Second District, Claiborne and Carrollton will be form the dividing line, and in the Sixth District, the dividing line will snake along Louisiana Avenue, Danneel, First and St. Charles Avenue.

The changes are slated to take effect Jan. 1.

For more information or to see the changes in other parts of New Orleans, see this report by Paul Murphy of our partners at WWL-TV.