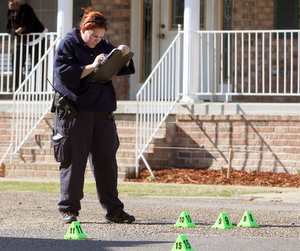 The car used by several men in a fatal shooting Wednesday on Monroe Street just outside Johnson Elementary School fits the description of a car taken the previous night at gunpoint in a carjacking in Broadmoor, investigators said.

On Tuesday night, a woman sitting in her tan 2005 Honda Accord with Pennsylvania plates outside a home on Upperline just over a block off of South Claiborne Avenue was approached by two men who demanded her cell phone, then forced her to give up her keys and stole the car, police said at the time.

Just before noon Wednesday, Ray Maxwell was shot to death in a volley of gunfire from several men in a car at the intersection of Monroe and Hickory streets. Witnesses initially told police that “the victim was being chased down and fired at by several young males traveling in a vehicle, possibly a gold colored Honda,” according to an official NOPD news release, and investigators are looking into the possibility that it was the same car, said Sgt. Chris Billiot of the NOPD Second District persons-crime division at Thursday’s COMSTAT meeting. The car had not been located as of Thursday, Billiot said.

The shooting may have been part of an ongoing struggle over drug-dealing territory in that area, Billiot said.

Anyone who sees the car is urged to call 911 immediately. The carjacking is being investigated by Second District detectives, available at 658-6020; the fatal shooting is being investigated by Homicide Detective Kevin Burns (658-5300), and anyone who wishes to leave an anonymous tip in either case that could lead to a cash reward should call CrimeStoppers at 822-1111.