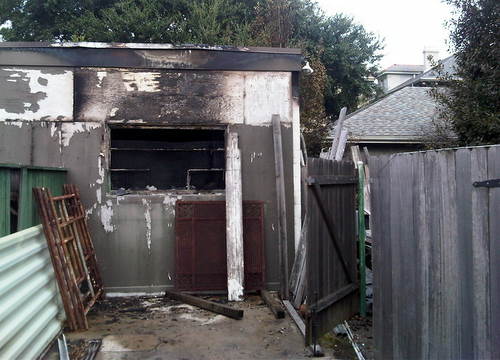 The shed behind the old Bultman residence at the corner of St. Charles and Louisiana avenues burned Tuesday morning, but the fire was extinguished before any of the surrounding structures were damaged. (Robert Morris, UptownMessenger.com)

A blaze that broke out this morning in a shed behind the former Borders store in the old Bultman funeral home on St. Charles Avenue was quickly extinguished before its flames could damage the nearby historic Bultman residence or other nearby homes.

The tool shed behind the Freret-Bultman Plantation House caught fire about 11 a.m., said Stacey Morigeau, program coordinator for the New Orleans Musicians Assistance Foundation, which is housed in the historic home. A mailman was actually the first to notice smoke coming from the shed, Morigeau said, and flames were just climbing out of the structure when firefighters arrived and extinguished the blaze.

The shed is situated behind the historic Bultman residence on Louisiana Avenue, just past the rear of the parking lot that formerly served the Borders bookstore and former funeral home on St. Charles Avenue. The shed itself was deeply scorched, but the flames did not reach any other structures.

“We’re just glad it happened today, when we’re all here,” Morigeau said, noting how much more serious the fire could have been had it started at night. “None of us wanted it to get to any of these houses.”

The cause of the fire hasn’t been determined, Morigeau said.