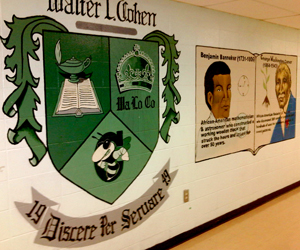 A mural in a Walter L. Cohen High School hallway shows the tradition and pride in the school. (Robert Morris, UptownMessenger.com)

The state’s plan to transform Walter L. Cohen High School into a charter school over the next two years inspires a mixed reaction through the school community, based on a Wednesday night meeting with dozens of alumni, faculty, parents and students.

While some Cohen supporters agreed with the state that the school is in dire need of dramatic change to its dismal, lowest-in-the-state performance, many remain skeptical about what they see as a painful transition with an uncertain outcome.

The plan at Cohen is for a gradual takeover by a charter operator, New Orleans College Prep. This year, the direct-run Cohen did not accept any ninth-grade students, while College Prep began operating a ninth grade on the third floor of the Cohen building. Next year, the traditionally-run high school will only have 11th and 12th grades, while College Prep will add a 10th grade.

Based on an agreement with the Walter L. Cohen Alumni Association, the school will retain its name, modified in some cases as “Walter L. Cohen High School (operated by New Orleans College Prep).” In return, the Cohen alumni have agreed to remain involved in the new school through academic mentoring and social work for students.

“I graduated from Cohen in 1992, and when I looked in the paper [this year] and saw that Cohen had a F+ and a 28-point performance score, I was pissed off, and everyone in this room should be too,” Murray said.

Decades ago, Cohen was a school with a reputation for excellence, one that children from around the city would cross district lines to attend, Murray said. Over the years, it seems to have become progressively harder for the students who want to excel to do so, which is why the alumni support the transition to a charter operator.

“The only way to modify that situation is to change the climate and culture around the students,” Murray said.

‘Not every school has a plus’

Cohen’s assistant principal, Susan Moore, said not enough attention has been focused on the recent growth in Cohen’s scores. Cohen’s “F+” is comprised of two pieces: the “F” is based on the low score itself, but the “plus” represents the school’s growth over the last year. Cohen’s performance score jumped nearly eight points from 2009 to 2010, from 20.4 to 28.2, and inched upward again in 2011 to 28.8.

“We are a failing school, but we’re not failures. We do have a plus, and not every school has a plus,” Moore said. “Don’t put your faces down, don’t walk out shame faced, because we are making progress. … We are the hospital. We are take in the ones that no one else will.”

“New Orleans College Prep in that first year made a truly extraordinary effort on student achievement, and some of that dropped off last year,” White explained after the meeting. “But their results are still well above Cohen’s. In a situation when you have the lowest-performing non-alternative school in the state, we need to change the outcomes for these kids.”

Many of the city’s most troubled students end up at Cohen, White acknowledged, saying that if some growth wasn’t being demonstrated, the school’s transition to a charter would be much more sudden.

“This school has faced tremendous challenges, and I have extraordinary admiration for the students and the administrators who come here every day and face those challenges,” White said. “No excuses, but respect for people who are doing the work.” 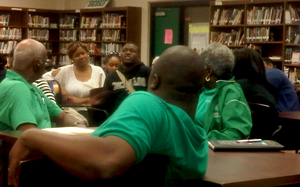 Beyond the scores, 1980 Cohen graduate Larry Jackson said he is skeptical about the overall plan for the city. He said it seems designed to continue pushing low-performing students away, “eliminating” them from the program rather than educating them.

Every morning when he’s jogging, Jackson said he sees children being picked up by school buses at 5:15 or 5:30 a.m. that won’t arrive at school for nearly three hours. “They’re working longer hours than I am,” Jackson said of the students.

White agreed, saying he recently visited a school that served students not only breakfast and lunch, but also dinner. The Recovery School District is working on a citywide application process this year that will give preference to students who want to attend schools closer to home, cutting down on transportation times, he said.

“The obligation is not to displace them. It is to find a place that will work for them,” White said.

The process of transition at Cohen also came under fire, with extensive questioning about how much job security high-performing teachers at Cohen actually have. White said they will receive preference but not a guarantee of employement, and College Prep director Ben Kleban said he would be “crazy” not to hire strong teachers from Cohen.

Students and parents also questioned the experience for students, saying that the separation of the two schools inside one building is creating tensions and a negative experience for students. In one particularly emotionally-charged moment, a woman declared that “There’s going to be a war in here” before storming out of the room.

While acknowledging the difficulty of the change, White said the stakes are too high not to proceed.

“In our society, if a child does not have a high-school diploma, the odds are very long for that child. There’s nothing more disruptive than that,” White said.”In the end, it’s my view if we have a situation where we don’t have enough children graduating, that’s an injustice to them and the city at large, and we do need to make a change.”

The meeting ended promptly after an hour, but White stayed in the Cohen library to talk for another forty minutes, seated at a table surrounded by current Cohen students, with their parents and older siblings standing behind them. Tevin Quinn, a Cohen junior, said he’ll remain at the school so he can stay in the marching band and on the basketball team his senior year. But seeing the campus slowly taken over by a separate school is both unpleasant and unfair, he said.

“We started from nothing,” Quinn said. “Now that we’re moving up, nobody wants to give us any credit.”

2 thoughts on “Transition of Cohen High to charter school inspires mix of optimism, skepticism and pain”