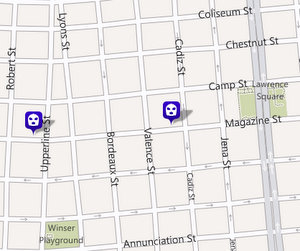 A robbery at the Sally Beauty Supply in the 4600 block of Magazine Street on Monday morning marks the second within a few blocks over the last month. (via NOPD.com)

A beauty supply store was robbed Monday morning on Magazine Street, and investigators hope that the dozens of hair clippers taken will surface and lead them back to a suspect who may also be responsible for a similar robbery nearby in late October.

The Sally Beauty Supply in the 4600 block of Magazine at about 8:30 a.m. Monday.  The suspect walked in, implied he had a gun and made the clerk lock the door, said Sgt. Chris Billiot of the NOPD Second District investigations unit. The suspect then demanded cash out of the safe and bagged up about 40 hair clippers to take with him, Billiot said.

“We need someone to come forward. Someone is going to know who has those clippers,” Billiot said.”He will be moving those clippers, so someone might get a pair and get a reward.”

The circumstances of the robbery are similar to another case a month ago, Billiot said, when the Vitamin Shoppe three blocks away was also robbed in the morning by a man suggesting he had a gun.

Anyone with information is urged to call Second District detectives at 658-6020 or, to leave a CrimeStoppers at 822-1111.