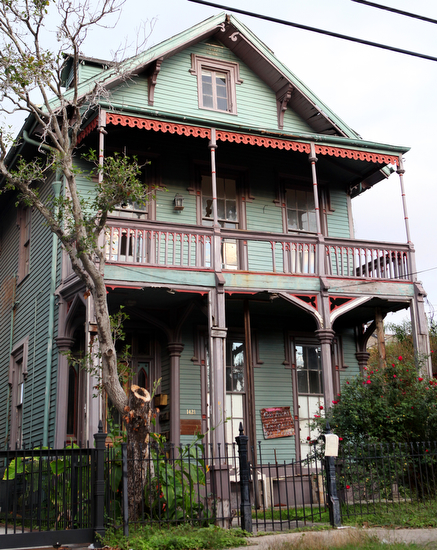 The house at 1421 Josephine Street could be considered one of the city's architectural masterpieces, but it has been so badly neglected that it's unclear whether it can be saved. (Sabree Hill, UptownMessenger.com)

I’ve dubbed it the “leaning tower of Josephine Street.” A half block down from my house, at 1421 Josephine, sits the Rountree House. It’s a masterpiece of postbellum Victorian architecture. It is also suffering from such extensive rot and termite damage that it would come as little surprise to anyone if a strong wind blew it over.

Some pathetic attempt has been made to brace the front porch. The columns are utterly compromised and are presently only held up by 2x4s screwed in on either side. The boards have been there for years, only narrowly averting disaster, and are beginning to appear weather-worn as their unpainted, unsealed surfaces remain boldly exposed to the elements.

The continued deterioration of the Rountree House is painful to watch. The experience is made more maddening by the house’s distinguished architectural pedigree. You see, 1421 Josephine is a carpenter gothic house – a style rare to New Orleans, particularly in domestic architecture. It is also very beautiful, mimicking some of the elements of medieval gothic churches.

It gets worse. The architect of this Victorian double-gallery, built in 1869, was not some flash-in-the-pan nobody. It was none other than James Freakin’ Freret.

This is no exaggeration. Freret trained before the Civil War in the ateliers of the Ecole des Beaux-Arts in Paris (never heard of it, but it sounds darn fancy) and he did so when very few Americans had ever studied there. Gary Van Zante of MIT describes Freret as “the first native-born New Orleans architect to achieve national prominence in the profession.” Heck, I hear we even named a major street after the guy.

Could this get any worse? Well, sadly, yes. Not only is this house large, not only does it have a distinctive and rare architectural style, not only was it designed by and architectural god – it’s the *only* blighted property on the block, and one of a dwindling number in the neighborhood. If the Lower Garden District were an antique tapestry, 1421 Josephine would be a gigantic moth hole.

Since I live on this block, I have to see this tragic assault on the eye every single blasted day. Consequently, I decided to determine exactly what happened here. According to the Orleans Perish Assessor’s Office, 1421 Josephine was purchased by a limited liability corporation over ten years ago in 2001.

Continued inquiry led to the discovery than this corporation is, in fact, community property in a divorce proceeding that has been pending since 2003. The case is on its third judge and its second special master (an individual appointed by the court to assist in managing cases with complex issues). Despite the passage of eight years, the system has failed to push this case towards a resolution. In the meantime, the Rountree house has remained in limbo.

In a previous column, I wrote about how Louisiana inheritance law fails to promote property ownership by a single individual and thus leads to properties being divided among several heirs – a condition which enables blight. Louisiana family law has a similar defect. Contested divorce proceedings (particularly those between wealthy spouses who can afford interminable legal cases) often drag out for years while indecisive judges twiddle their thumbs. By the time these cases actually come to trial, each side has often spent a small fortune on experts and legal fees with little having been accomplished.

The bottom line is that when you have multiple owners of a property and a lawsuit, don’t hold your breath waiting for the property to be renovated.

So what is the city doing about this? What valiant efforts are being taken by our stuffy, surly public servants? New Orleans Code Enforcement appears to be a no-show. The HDLC is citing the property for “demolition by neglect.” Thankfully, an application has been filed with the HDLC to perform the work necessary to prevent further deterioration, but there is no telling how long it will be before a full renovation can be effected.

I’d love to accuse the Assessor’s office of botching the assessment for the Rountree house, but frankly, it’s probably more accurate now than it was two years ago. As a house deteriorates, it becomes less valuable.

Although I despise heavy-handed government action, I also loathe waste and decay. While Orleans Civil District Court and the City of New Orleans drag their feet, the Rountree house crumbles. With the system as bad as it is, all we can do at this juncture is hope and pray that something gives.