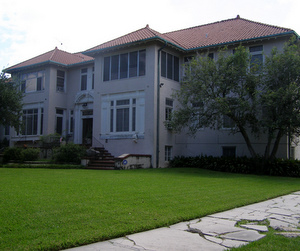 This past Thursday, the New Orleans City Council did a curious and terrible thing.  It voted to overrule the National Conservation District Committee and allow the demolition of a historic St. Charles Avenue mansion designed by a prominent architect.

At first glance, this would seem to be contrary to the most fundamental principles underlying historic preservation in this city. The mansion, located at 5428 St. Charles Avenue, was designed by Emile Weil, the architect responsible for such beauties as the Saenger and Jerusalem Temple. Its present owner, Jeffrey Goldring (of the New Orleans Goldrings) wants to knock the sucker down and replace it with a home designed by Northshore architect Ken Tate.

Now, if you or I owned a crappy, nondescript shotgun designed by a nobody, and we asked to tear it down to build a new house, we would face an uphill battle. Thus, one would think that razing a mansion designed by a big-name architect would be nigh impossible. Alas, you would be wrong.

So how did this happen? My own forensic analysis reveals that with money, time and genuflection to neighborhood groups, you could tear down the Cabildo.

The first step Messer. Goldring took towards realizing his champagne wishes and McMansion dreams was to toady up excessively to the St. Charles Avenue Association. At their worst, neighborhood associations can be like Eric Cartman in “South Park:” They’re loud, crude, and more than anything else they want you to respect their authority (or, as Cartman would say, ‘authori-TAH.’)

Now, dealing with neighborhood associations typically guarantees the next step – getting the support of the district’s councilperson. Because the path of least resistance is typically to defer to neighborhood groups (it saves the councilperson the trouble of thinking for him- or herself) getting their support is key. Accordingly, Councilwoman Guidry openly supported demolition of the Weil house.

Next, the Goldrings had to sway the rest of City Council, but this was a simple task because the council is a macrocosm of its individual members’ laziness.  They virtually always defer to the councilperson in whose district the property sits.

What all this means is that in order to get a historic home sent to the dustbin of history you need to lobby neighborhood groups like nobody‘s business. This requires copious amounts of cash which the Goldrings conveniently possessed (The Steeg Firm doesn’t work for free).

The Goldrings did enter into a Byzantine neighborhood agreement with the St. Charles Avenue Association, but it didn’t change the bottom line.  An old mansion in decent shape will be bulldozed. I personally own a large house that was built by a noted architect, Charles Hillger (he designed Trinity Episcopal, Rayne Methodist, and the original Temple Siani). My house isn’t architecturally remarkable. It’s a basic, Italianate double-gallery. Nevertheless, it’s still a magnificent house and I couldn’t conceive of razing it.

Moreover, a central virtue of historic properties is that they were built to last. As Ann Abbrecht, the prior owner of 5428 St. Charles, noted during the council hearing, the mansion designed by Weil featured “100-year-old cypress.” Old growth cypress is like Hardie board on steroids. I know from experience that newer woods are weaker, more prone to rot and more attractive to termites than the building materials of old. Put bluntly, they stink.

It’s disturbing that all it takes is money and time to demolish a historic St. Charles Avenue mansion. As Barry Grodsky, the Goldring’s neighbor and my own colleague, noted during the hearing, “there’s no need to tear this building down.” It is a senseless act of violence against this city’s architectural history.

I understand that architecture should not be static, and that every historic building isn’t worth saving, but this one was. All the wealth and power in the world doesn’t change that, nor does it make this ill-conceived demolition easier to bear.

24 thoughts on “Owen Courreges: How to tear down anything in three simple steps”