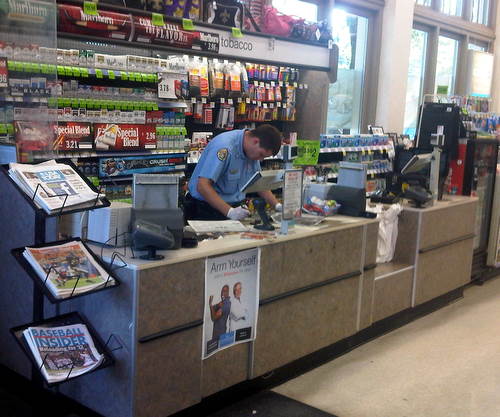 An officer with the NOPD Sixth District searches for fingerprints on a newspaper touched by a suspect in an attempted robbery of the Walgreens pharmacy on St. Charles Avenue. (Robert Morris, UptownMessenger.com)

An attentive cashier at the Walgreens pharmacy on St. Charles Avenue foiled an attempted robbery when she realized her assailant was only pretending to have a weapon, and scared him off without giving up any of the store’s money, police said.

The would-be robber walked into the store around 1 p.m. Wednesday, picked up a newspaper and put it on the counter near the cash register, then approached the cashier with his hand underneath his sweatshirt as if he had a gun, according to the police report. He demanded “all the 10s and 20s” and began trying to open the register himself, but the cashier realized he was actually unarmed, the report states. She backed away and called for help, and the man ran out of the store and down the street. 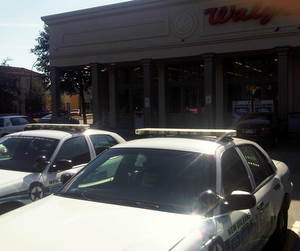 The attempted robbery call quickly drew a number of NOPD officers and detectives to the Walgreens store. (Robert Morris, UptownMessenger.com)

The suspect is described as a 5-foot-6, 150-pound clean-shaven black man in his early 40s, wearing a navy blue hooded sweatshirt with white writing on the front and black pants. Investigators are also hoping to recover surveillance video with the man’s image.

Anyone with information is asked to call the NOPD Sixth District at 658-6060 or CrimeStoppers at 822-1111 to leave an anonymous tip that could be eligible for a cash reward.