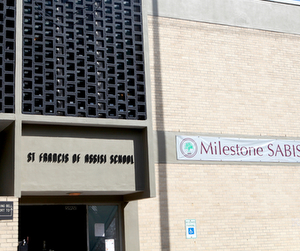 St. Francis of Assisi Catholic Church’s recent selection of Lycée Français de la Nouvelle-Orléans as the new tenant of its school building drew sharp criticism Monday evening from the board of Milestone SABIS Academy, the school that has been in the building for several years.

Lycée Français announced Monday morning that the St. Francis of Assisi school building at State and Patton streets will be its new main campus starting next summer, and that it has space for 500 students, enough to accommodate several years of the school’s growth.

After a Monday night board meeting, the leaders of Milestone SABIS Academy issued their own announcement, saying that they only learned of the plans for the building through media reports, saying the church “opted to not negotiate the lease renewal in good faith.” The SABIS board pledged to find new space for their school in time to continue instruction without interruption.

The statement from Milestone SABIS Academy follows in its entirety:

After a nine year working relationship, Innovators in Milestone, Inc., the governing board for Milestone SABIS Academy in New Orleans, is disappointed to learn today through media reports that its landlord, St. Francis Assisi Catholic Church has decided to lease its school building to Lycee Francais de la Nouvelle-Orleans. Milestone has been a model tenant throughout its 9-year lease term with St. Francis and made several improvements to the facility that incurred to the benefit of the landlord. Despite our investments as well as the facts that St. Francis increased Milestone’s rent and opted to not negotiate the lease renewal in good faith, Milestone still fought to renew its lease with St. Francis to ensure that the children had an appropriate setting in which to learn.

The Board, however, is excited to announce that it is moving forward with its plans to expand the school by adding grade levels (eventually becoming a K-12 school). At tonight’s board meeting, the Board unanimously voted to advance plans to secure land for a new campus and facility, which will include a state-of-the art facility, travel convenience and more green space to accommodate current and future enrollment. Milestone’s Board of Directors and Staff are confident that the move to a permanent location will enable us to continue our pattern of providing an excellent education to the children we serve without interruption.