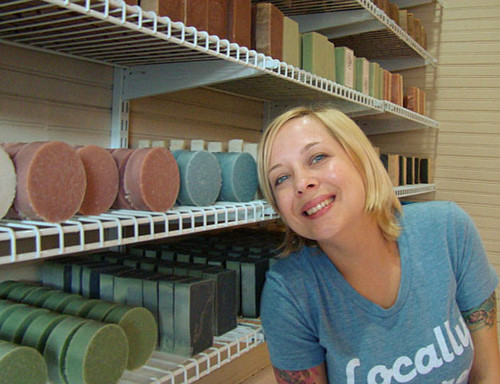 This week, I catch up with an old pal.  Emily Davis and I have known each other for many years, and I wanted to share with the readers of UptownMessenger.com and the world one of my favorite New Orleanians and soapmaker extraordinaire, a local lady my daughters rightly and simply call “Ms. Emily.”

JPV: So, we’ve known each other for many years, but who are you and what do you do?

ED: I am Emily Davis (aka Emily Manger), a local girl who enjoys tall tales, outspoken people, family traditions and Louisiana cooking. I spend lots of time in the garden and at the farmer’s markets collecting ingredients for my meals, and I don’t think of soap recipes as that much different. Whenever possible I use local ingredients. Keeping it local and promoting our culture are important to me in everything that I do and Sweet Olive Soap Works is a reflection of that.

JPV: For you, the name ‘Sweet Olive’ is borne from what or where exactly?

ED: My grandmother was a proper Uptown lady with respectable social standing who believed that girls should always wear white gloves and pantyhose when flying on an airplane. In stark contrast, my paternal grandma donned muumuus, collected plastic religious figurines and loved Dixie Beer. I don’t think that either woman cared a great deal for the other, and I once overheard grandmother complain about grandma saying, “I can’t understand a word that woman says,” but what she really meant was, “I don’t recognize Y’at as a language.”

Besides weekends with me, the one thing that these women shared was their love of the sweet olives that both of them grew along their property lines. Grandmother’s were kept nicely trimmed in tree fashion, and because she liked to make everything a big to-do, my oldest cousin was allowed to climb up them to collect the blossoms when she dramatically announced their presence in the fall. Grandma of the Ninth Ward preferred to let hers grow out like wild bushes, and Lord help you if you dared pluck one of her treasured blossoms.

I adore these women and I like to think that I am quite a bit like both of them and so, I too am passionate about sweet olives but will tell you that I prefer to let mine grow-out bushy, and Lord help you if I catch your dog relieving itself on one of them.

JPV: For the record, you’re a homebody, right?  As such, when you lived “above Canal” I never saw you.  Now that you’re back and “below Canal” I see you slightly more (LOL).  Why are New Orleanians so attached to their homes, blocks, and ‘hoods?

ED: No doubt about it. I am blatantly guilty of neighborhoodism, and I take comfort knowing that I am in a city full of people that happily suffer the same affliction. I was prone to running wild in the streets throughout my twenties – downtown was the perfect place for that and I had the best of company doing it. But now Riverbend is more my speed. I bought my childhood home up here and like being in a place where folks ask about my people, serve cocktails on the front porch and still tease me about the time I rode my tricycle down the stairs like it was yesterday. We take a lot of pride in where we live, and I think that’s got everything to do with the people we are fortunate enough to call our neighbors – no matter which side of Canal Street the allegiance currently lies.

JPV: You have an exceptional appreciation for regional history. I mean really an unmatched thirst it seems. Where does that come from?

ED: It’s more of a madness that I believe is the result of being raised in a Southern home by people who claimed that the history books were written by Yankees and therefore not to be trusted. My mother’s family is full of regional historians, and each had their specific obsession and point to prove, but not me. I just go wherever I feel like going and married a Yankee despite my Grandmother’s reservations. More than anything, I’m addicted to the hunt through the archives. It’s a strong force that takes over when some tidbit of the past peaks my interest, I can’t rest until every piece of information to be had is collected. When the topic is exhausted, the research disappears into one of the file-folders that have taken over the living room and has nothing more than a chance of being brought-up in casual conversation at a later date.

JPV: How ingrained is soapmaking into your life?  Like, do you dream about it?

ED: In fact, just last light I dreamt that the new rage was putting panko bread crumbs in soap and the line to get it was around the block. The Soup Nazi was there helping out and even he was in high spirits. The soaps looked and smelled just like coconut macaroons, and I really do love macaroons. All in all, a good day-at-the-office dream. I live soap. I’ve never worked so hard and I couldn’t be more satisfied with how well the soap works is doing. I love being my own boss, the long hours that come with it and most of all the satisfaction that comes from making things with my hands. This is exactly what I wanted to be when I grew up!

JPV: Ever miss the bar business?

ED: I wouldn’t trade those years for anything and with no animosity I can tell you that I don’t miss it a bit. I’ve still got my regular customers, I just serve them soap now and they’re partial to the beer flavors.

Catch Emily at her usual booth at Po-Boy Fest on Sunday, Nov. 20th, on Oak Street or visit her website, www.sweetolivesoapworks.com.

One thought on “Jean-Paul Villere: The Soap Lady Cometh”