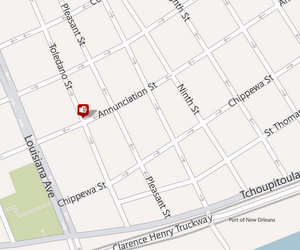 The driver told police he was shot in the head at Annunciation and Toledano. (via NOPD.com)

Deemed “the luckiest man in the world” by investigators, a driver in the Irish Channel survived being shot in the back of the head and even managed to drive himself to a nearby hospital for treatment, authorities said.

The man was driving near Annunciation and Toledano around 1:30 a.m. Nov. 13 when he heard gunshots ring out, and one bullet shattered his rear window and lodged itself in the back of his skull, said NOPD Sixth District investigators last week’s internal meeting. The man then drove himself to Touro Infirmary, just a few blocks away, where doctors treated him and subsequently released him without removing the bullet from the bone, said Lt. Troy Savage of the Sixth District investigative unit.

The victim offered very little in the way of information about the shooting, telling investigators he didn’t know who was shooting in the area or why anyone would target him, Savage said. No shell casings were found in the area, nor could police locate a crime scene. The victim was known to police from previous incidents, but the fact that the gunshot came through the car’s back window does suggest he may not have known who shot him, Savage said.