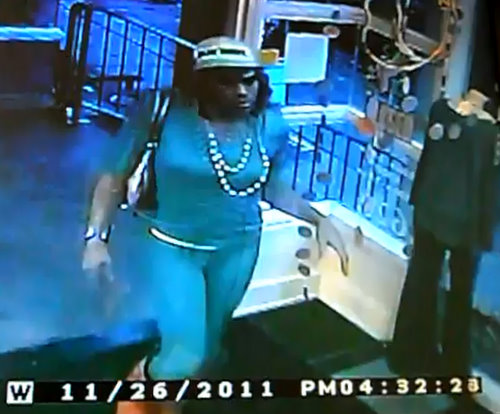 An image from a surveillance video shows a shoplifting in progress at Lola Boutique in the Riverbend.

A Riverbend boutique has lost thousands of dollars in costly designer clothes after being hit twice in a month by shoplifters who appear to be transvestites, the owners say.

About a month ago, a thin man flamboyantly dressed as a woman entered Lola Boutique on a Friday afternoon, and something about the way he was browsing raised the concern of store owner Tiffany Treadaway Mouton. She asked if he needed any help, she said, and he left without buying anything.

The next day, when the store was being tended by an employee in the mid-afternoon, a cross-dresser entered the store, took six or seven items of designer denim worth about $1,200 and dashed out, Mouton said. When she showed up and viewed the store’s surveillance video, it appeared to be the same person who had been checking the place out the day before.

“I think he specifically knew those jeans were there,” Mouton said.

This past Saturday, the store was struck again, when a cross-dressing shopper again snatched several items off the sale rack by the door — specifically placed there to minimize losses in the event of more shoplifting. Store employees are still trying to determine the exact cost of what was stolen in that incident, but Mouton says it appears to be $600 or $700 in merchandise.

The surveillance video from Saturday shows the shoplifter lingering outside the boutique’s glass door, then dashing in, lifting an armload of clothing and heading right back out in about eight seconds’ time.
Mouton says it is possible but not “100 percent certain” that the shoplifting was done by the same person both times.

“This time, I don’t know if he had any goal in mind for what he was going to take,” Mouton said. “But they got a pretty hefty handful of stuff.”

Remarkably, this is not the first time Uptown New Orleans has had a problem with cross-dressing transvestites. In 2006, Lower Magazine Street boutiques experienced a widely-reported crime wave of sorts perpetrated by cross-dressing fashionistas.

Unfortunately, it is also not Lola’s first experience with a determined thief, even though the store has been open only a year. In January and February, Lola was broken into twice among a rash of burglaries targeting the cash drawers of about a dozen Riverbend businesses. Michael J. Dardar, found living under a house on South Carrollton surrounded by stolen items, was arrested in connection with that spree and told police that he turned to burglary after he lost his job researching property titles when the real-estate market crashed. He pleaded guilty to several counts of burglary in August, court records show. 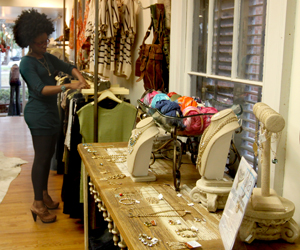 A Lola Boutique employee checks merchandise in early March after the store was part of a Riverbend business burglary spree. (Sabree Hill, UptownMessenger.com)

The experience with Dardar led Lola to first install motion-detection alarms and the camera system that captured the latest thief’s image, and then to put bars on the windows after Dardar came in through one of them. Now, Mouton said she is deciding whether to install anti-shoplifting devices at the door as well.

Between the thefts and the mounting security costs, the experience has been frustrating, Mouton said.