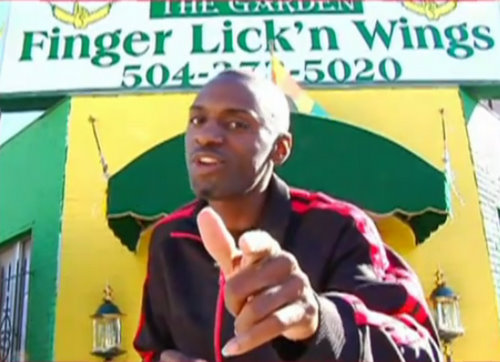 Finger Lick'n Wings owner Marlon Horton, also known in his rap career as 10th Ward Buck, invites customers to his restaurant on Jackson Avenue in this image from a commercial on his website, fingerlicknwings.com.

Concerns about what neighbors described as repeated disruptive block parties at a Jackson Avenue chicken wings restaurant led the Coliseum Square Association to withhold its support for a liquor license at the establishment Monday night.

The owner of Finger Lick’n Wings, Marlon Horton, has said that he originally envisioned his competition for customers as small sandwich shops in the neighborhood, but discovered that many customers prefer takeout orders or delivery because he cannot sell alcohol with his food. On game days, “it’s like crickets” in his restaurant, because sports fans are all at restaurants like WOW Cafe and Wingery that can sell alcohol.

Horton extolled the good behavior of his business, noting its well-kept storefront and dedication to fighting litter, but many neighbors complain that he has frequently held large parties that consume all of Jackson Avenue. Horton replied that his local fame as bounce artist 10th Ward Buck means that any event at his store draws a large crowd, but said he was willing to sign a good-neighbor agreement to stop having any parties.

The most strident opposition Monday came from an across-the-street neighbor (who left the meeting before his name could be requested for this article), who said that Horton has previously promised in meetings with police officers present to stop having block parties, but that they have continued. But similar complaints have been made in a flurry of emails that have been crossing the neighborhood for the last month, and several members of the Coliseum Square Association said they had seen little evidence to refute the block-party allegations.

Ultimately, the association board voted 8-7 to oppose any liquor license application by Horton, over the objections of a handful of association members who said they would have preferred to take no action on it. His request found very little support among the association, though several members said they were enthusiastic patrons of the business and one suggested reconsidering the request down the line if the block parties stop on their own.

After the association’s vote, it appears unlikely that the issue will come before the city at all. Horton has not formally applied for the liquor license, preferring to save the four-digit application fee until he was assured of his neighbors’ support. The River Gardens development, which the restaurant is actually closer to than Coliseum Square, voiced much more vigorous opposition a month ago than Coliseum Square did Monday. Finger Lick’n Wings also touches a third group, the Irish Channel Neighborhood Association, but they have been waiting on a decision first from the two closer associations.

To read a full transcript of our live coverage of Monday’s meeting, click in the box below.