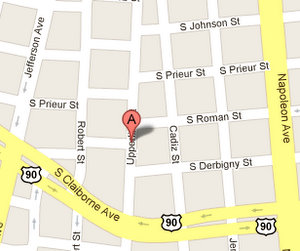 The 3100 block of Upperline Street in Broadmoor (via Google maps)

Two men forced a woman to give up her car at gunpoint on Upperline Street in the Broadmoor neighborhood Tuesday evening, and police are urging anyone who sees it to call 911.

The victim was sitting in her vehicle in the 3100 block of Upperline shortly before 7 p.m. when two men approached and demanded her phone from her, said NOPD Detective Nathan McGhee. She refused to hand it over, and the men pulled out a gray semi-automatic handgun and told her to get out of the car, McGhee said. Once she was out, they snatched the keys away from her, hurting her hand but leaving her otherwise unharmed, McGhee said.

The vehicle is a tan 2005 Honda Accord with a Pennsylvania license plate. Anyone who has seen it should call 911 immediately.