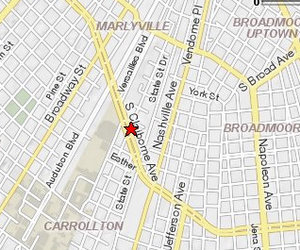 Location of the Capital One branch the victim was headed to -- exact location of robbery not shown. (via capitalone.com)

A businessman was robbed at gunpoint Friday morning as he attempted to make a deposit at a Claiborne Avenue bank, and while investigators do not believe he was followed or targeted, they are searching for video in the area that may help identify his assailant.

The victim had parked his car about 9:50 a.m. and was walking to the Capital One branch on South Claiborne Avenue near Calhoun Street to make a business deposit when a stranger approached and tried to grab the bag he was carrying with the money in it off his back, said Sgt. Chris Billiot of the NOPD Second District persons-crimes division. A struggle ensued, and the robber pulled a gun, then made off with the bag, Billiot said.

The victim does not seem to have been followed to the bank, and in fact hadn’t even planned on going there, he told detectives. He had simply been running errands and “just happened to be going past the bank,” Billiot said, so no one knew he would be there.

Video cameras at the bank itself did not capture the robbery, but Billiot said investigators are hoping that footage of the suspect fleeing was caught by some of the other businesses in the Calhoun commercial cluster. Anyone with information should call Second District detectives at 658-6020 or CrimeStoppers at 822-1111 to leave an anonymous tip that could be eligible for a cash reward.