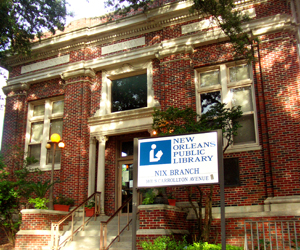 Now that the Nix branch library has reopened, its neighbors in the Carrollton area plan to help spruce it up a bit.

The library closed in early June because of a serious failure of its air conditioning system, and finally reopened in late September. Soon afterward, Cherri Ainsworth of the Central Carrollton Association spoke to branch manager Damian Lambert about a wish list of improvements that neighbors might be able to help with, and came back with three initial items: a storytelling chair (“a sturdy chair with a whimsical fabric,” was Ainsworth’s precise description), assistance planting several oleander plants, and help rehabilitating several crepe myrtles that have never bloomed.

At a meeting last week, the association agreed to all three requests. Board members voted unanimously to spend up to $500 purchasing a chair and having it upholstered, and pledged to help with the plants as well. The association was already planning a tree planting around the neighborhood in December with Hike for KaTREEna, and suggested that work on the plants could be combined with that project.

While the library was closed, neighbors were nervous that the popular little branch might not reopen, but those fears were somewhat addressed by the repairs put into the building.

“We are delighted that the city was so responsive in fixing the library so quickly,” association president Barbara Johnson said Monday.