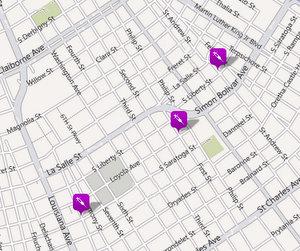 The locations of three drug busts in Central City this week. (via nopd.com)

Seven men were arrested in three different drug stings Wednesday and Thursday in Central City in an effort to apply pressure to the area where associates of recently convicted murderer Telly Hankton may be operating, police said.

On Wednesday afternoon, an undercover officer purchased marijuana at 2221 First Street, leading to the arrests of three men: 39-year-old Johnny L. Smith, 19-year-old Demond A. Hutton and 40-year-old Kevin Banks, according to an email alert from the NOPD Sixth District. A search of the residence turned up more marijuana and the money used to make the undercover purchase, authorities said. Each was charged with distribution of marijuana, according to jail records.

On Thursday, narcotics detectives near South Liberty and St. Andrew streets watched 24-year-old Raymond Frith work a drug stash under a house, removing several rocks of crack cocaine from it and then returning to the intersection where he sold it by hand, police said in a second release. When police arrested him and returned to the stash, they found 73 individually wrapped pieces of crack cocaine, a larger piece and a .45-caliber Ruger handgun, police said. A further search under the house turned up another gun, which was also seized, police said.