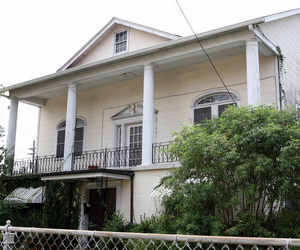 An exhibit of relics related to Pope John Paul II has the potential to save St. Henry’s Church and invigorate the neighborhood around it, and the demolition of the rectory across the street for a parking lot was an idea intended to alleviate traffic pressure, but is not an essential component of the plan, a parish priest told residents Thursday night.

“Not tearing down that rectory is not a deal breaker for the exhibit,” said Monsignor Christopher Nalty of Good Shepherd Parish. “I saw more parking as being a benefit for the neighborhood. But in the end, I don’t know what to do with the building.”

For several months, Nalty has been in discussions with a priest in Texas about creating an exhibit of items owned by and associated with Pope John Paul II for four months next winter that would be housed in St. Henry’s. The project would involve some substantial renovations to the church itself, such as replacing the carpeting with a more traditional church floor and upgrading the climate-control systems to be suitable for the relics, as well as to the first floor of the Pauline Center next door, adding bathrooms and creating a sort of visitor’s center for pilgrims, Nalty said.

The exhibit will likely bring in a steady flow of visitors, and while some off-site parking will be used, Nalty said he was still concerned about the impact on the neighborhood and came up with the idea of demolishing the rectory on General Pershing Street for a parking lot.

“The parking lot is actually an afterthought,” Nalty said. “The big thing is, will the church actually work (for the exhibit), and will the revenue from exhibit justify the money we put into it?”

The century-old rectory is currently leased by the Ecole Bilingue private school, but after lead paint was discovered inside, the building was deemed unsuitable for children and is now of limited use to the school, Nalty said. Ecole Bilingue would prefer the parish take one of three routes: to rehabilitate the building so the children can use it, to end the school’s lease or to sell the building outright so the school can conduct the renovations themselves. But all of those options have drawbacks for the parish: the cost of rehabilitation, the building becoming vacant again or the loss of the adjoining parking lot, which St. Henry’s will need in the long run, Nalty said.

Nalty had already shared his plans with the Friends of St. Henry’s, and he shares their hopes that St. Henry’s can one day reopen as a place of worship, he said. In the meantime, the exhibit could bring some long-overdue maintenance to the building, and the prestige associated with it — possibly even the permanent installment of a papal relic — could help ensure the church’s survival.

“We have said the rectory does not have near the attachment that the church does. It’s not in the greatest condition,” said Robert Morton of Friends of St. Henry’s. “As far as the exhibit, as a faith-based group, we look at this as a huge opportunity. If we can put up a plaque, or keep a relic there, we see that as an absolute guarantee that this church is protected.”

Further, the visitors to the exhibit will have a positive effect on the neighborhood, Nalty said, likening it to the joy on display at the funeral for Archbishop Philip Hannan that Nalty had attended earlier in the day.

“I really believe it’s a real spiritual benefit to the neighborhood,” Nalty said. “There’s a chance that this could really save this church.”

Some members of the Faubourg Marengo Neighborhood Association asked Nalty why another location wasn’t chosen, such as the Ursulines convent or the Our Lady of Lourdes building being used this year by Sojourner Truth on Freret Street. Those buildings have their own issues, Nalty said, but more broadly he wanted the benefits of the exhibit to accrue to St. Henry’s.

“There are probably a dozen places in the archdiocese that might work better, but it doesn’t help me,” Nalty said. “My aim is trying to help my parish. If it’s going to create a big problem, it will go somewhere else in the diocese, but I don’t have another plan for St. Henry’s.”

For the most part, Nalty’s description of the exhibit Thursday night found less opposition than in concerned residents’ first meeting last month. The demolition of the rectory for a parking lot, however, remains more controversial.

“The emails that I’ve been getting are just in horror that a 100-year-old building that withstood Katrina, to demolish it for a parking lot, that’s kind of wild,” said Julie Graybill, one of the neighborhood association’s leaders.

Citing the extensive rehabilitations she has seen of far more blighted buildings, neighbor Anne Farmer suggested that that the parish subdivide the lot to keep the existing parking for the church, then put the rectory up for sale to someone who will preserve it — possibly Ecole Bilingue, or someone else.

“You’re using a Metairie term, ‘tear down,'” Farmer said. “‘Tear down’ is not in the vocabulary Uptown.”

Other neighbors said they agreed that more parking would benefit the neighborhood, though they worried that it would also bring more foot traffic around their homes from Magazine Street and nearby Ms. Mae’s. Because little more than a dozen residents attended the meeting, Faubourg Marengo co-leader Bob Smith suggested polling the association’s email list of several hundred residents for a better sense of the neighborhood’s opinion.

In the meantime, Nalty said he would continue exploring options for the logistics of the exhibit. The bureaucratic hurdles to tearing down such an old building may make it not worth while in the long run, he said.

“If this is a huge deal to tear it down, we’ll have figure out something else,” Nalty said.

3 thoughts on “Preserving St. Henry’s rectory is “not a deal breaker” for papal exhibit, priest says”