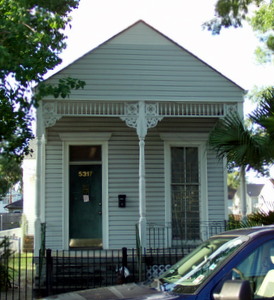 This Loyola Avenue house was slated for conversion into an early childhood center for the Newman school, but will remain untouched for the coming year after the school withdrew its plans. (Robert Morris, UptownMessenger.com)

After spending the summer meeting with neighbors and city officials, the Isidore Newman School has decided to withdraw a zoning request that would have allowed an expanded preschool facility for the coming year.

Newman officials had planned to move their early childhood education facility, known as the Greenie House, into a cluster of reimagined houses at the corner of Loyola and Valmont. The project was due for a vote by City Council last Thursday, but the school instead withdrew its request altogether. It had become too late to begin construction and renovations in order to be ready for students by next fall, said Newman attorney Justin Schmidt in a telephone interview afterward, so the school leadership decided to postpone the entire project altogether.

“Given that there were some delays in the approval process in this go-round, Newman realized it wasn’t going to make 2012 school year, and it just felt it would be better to withdraw and reapply once it spent more time looking at a complete master plan,” Schmidt said.

Among the other elements in the zoning request, Newman had hoped to extend the “school use” classification to the AutoPaint building on Danneel Street that is currently used for storage, but had no immediate plans for the building — an issue that had concerned neighbors when they met with Newman in July. Without the zoning change, the building will continue being used for storage, as it would have for the time being anyway.

Newman had also asked to extend the same school-use classification to a house at 1803 Jefferson that was to be the headmaster’s home. The old headmaster’s home had been on Versailles Street, but Head of Schools T.J. Locke had decided to move his family onto campus this year. Prior to his decision, the school’s plan had envisioned the house on Jefferson as an alumni house, also worrying neighbors that it could become a less residential use.

With the zoning request shelved, the house on Jefferson retains its residential zoning, and Locke has already moved in, Schmidt said.

“He’s there now,” Schmidt said. “Between the time we submitted application and the time it was vetted out in public, there was a decision for him to move into the house. We just spent a lot of money renovating it and fixing it up, so he’s in there with his wife and children.”