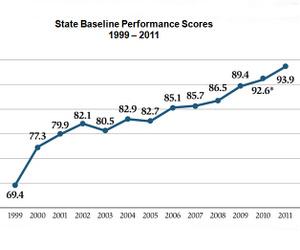 A majority of Uptown public schools continued the improvement that has characterized New Orleans schools in recent years, with Lusher and Audubon charter schools both earning “A” grades and New Orleans Charter Science and Math High School improving its score by more than 30 percent.

Uptown New Orleans has a relatively strong selection of campuses deemed “honor roll” schools by the state, those earning an A or B based on 2011 school performance scores released Wednesday. The lower-performing schools fall roughly into two categories: one group striving upward at varying rates, and similar-sized group continuing to struggle.

The scores of the Uptown schools awarded a “B” all cluster within a few points roughly from 105 to 110: Benjamin Franklin Elementary (111.5), International School of Louisiana (110.8), Eleanor McMain Secondary (108), SciHigh (106.4) and three KIPP campuses.

This group saw some of the most substantial change in scores. In addition to SciHigh’s 25-point gain, McMain increased by 19 points over last year. ISL increased by 7.8 points, and KIPP Believe College Prep (111.6) increased by 5.1.

Schools on the way up

Reflecting a citywide split between high and low-performing schools with relatively few in the middle, no Uptown school was awarded a “C.”

Several schools that received D grades this year, however, did so after substantial gains.

Wilson, Johnson and Banneker all grew to exceed last year’s designation as failing, through they are not out of the woods yet. Next year, the threshold between D and F will be raised to 75.

Three other Uptown “D” schools continued their trend of several years of slow growth by increasing about 3 points each — Sophie B. Wright on Napoleon (86.1), Milestone SABIS Academy just off State Street (79.3), and Samuel J. Green Charter near Freret (77.3) — but none met the state’s growth targets.

Three schools hung on to a “D” grade despite a slide in performance scores, Arthur Ashe Charter on Laurel Street with a 2.2-point decrease to 81.6; NOLA College Prep in Central City, which fell 5.8 points to 67.6, nearly erasing the gains it had made the previous year; and Crocker Arts and Technology School on Milan Street in the Touro neighborhood, which fell 2 points to 65.2, just a hair above an “F.”

Two Uptown schools that earned high F’s are being evaluated for their first year, so their growth could not be gauged: Batiste Cultural Arts at Live Oak and SciTech Academy at Laurel in the Irish Channel (60.8 and 60.6, respectively). Both are now run by ReNEW Schools, one of the most rapidly growing charter operators in the city.

Finally, reflecting what may be another citywide trend, two high schools received low F’s: Sojourner Truth Academy near Freret and Napoleon (48.7) and Walter L. Cohen High School on Baronne Street (28.8). High schools accounted for the five or six lowest schools in the city, and Cohen’s score was lowest among that group.

4 thoughts on “Many Uptown schools continue performance gains in 2011”