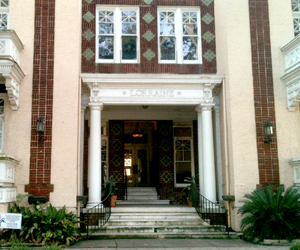 The 91-year-old Lorraine Apartments on St. Charles Avenue have a new lease on life and can move forward with renovations after the city council corrected a zoning problem last week that could have kept the historic building shuttered indefinitely.

Built in 1920, the Lorraine was given zoning in 1953 for a two-family residential structure, but as long as the building remained in continuous use, that classification was not enforced. It was bought in 2008 and closed for renovations, but the developers found substantial unexpected problems with its mechanical systems, and the project fell by the wayside.

When the owners recently attempted to resume the project, they found that the building’s status as an apartment building has expired, and that its zoning would only allow, at most, a double. They asked for a rezoning to multi-family residential so they could restore the original 14 units, but the City Planning Commission denied the request, calling it a “spot zone.”

In September, the owners appealed to the City Council, and City Councilwoman Susan Guidry led the effort to overrule the planning commission in the Lorraine’s favor.

“It’s a beautiful old apartment building on St. Charles Avenue,” Guidry said at the Sept. 1 meeting. “This is a building that could only be used for the purpose for which it has been used since 1920, and that’s an apartment building.”

The zoning change was finalized at the council’s Oct. 20 meeting, and architect Rick Fifield said the projec it is now moving ahead “as quickly as possible,” with the plans nearly finished and the permits likely to be sought in a week or so.

“Susan made an excellent call,” Fifield wrote in email Tuesday. “My only wonder is a structure in the CPC bureaucracy that does not allow the staff or Commission to call a rose a rose. I am baffled by the lack of appropriate response at those levels.”

The decision was also lauded by members of the surrounding Uptown Triangle Neighborhood Association, who had vocally supported the Lorraine’s renovation.

The council also made decisions in a number of other Uptown issues and deferred several others at its Oct. 20 meeting: