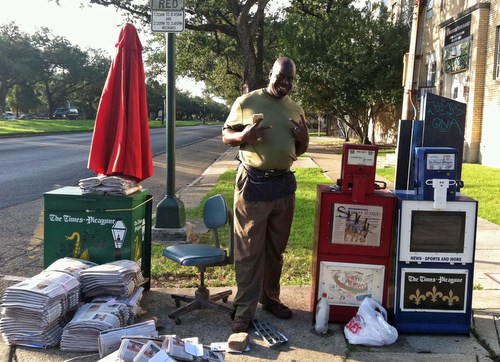 Arthur Joseph faithfully mans the corner of Napoleon and Freret. (photo by Jean-Paul Villere for UptownMessenger.com) 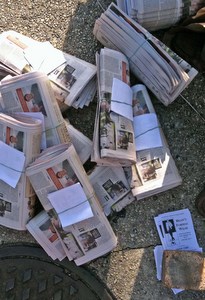 Inserts for Bean's Formal Wear, a Freret Street stalwart, are among the day's advertising inserts. (photo by Jean-Paul Villere for UptownMessenger.com)

It’s a Sunday morning in New Orleans, and for the next few hours a ritual will unfold.  Light traffic whispers through the streets as if trying not to wake anyone.  Sunlight warms the dew on last night’s Dixie cups strewn on a nearby sidewalk.  And corner newspaper purveyors appear like a sort of urban legend.  For but a few scant hours and during these hours only, the South’s oldest and New Orleans’ only newspaper, The Times-Picayune, will soon be personally handed off one by one.  And why?  I have no idea.

Every other day of the week at the corner, an unmanned newspaper vending machine may suffice, but make it a Sunday and suddenly there’s a face and a man, and he’s there every Sunday.  Again: why?  Again: I have no idea.  Perhaps the Sunday paper is too dense and sold in too many a quantity to pack a standard vending machine?  Perhaps.  Or perhaps there’s a special neighborhood circular hand-placed in each printing?  Perhaps.  Or perhaps it’s like the occasional bathroom attendant who offers you a hand towel?  You could get your own, but. . .

The routine and omnipresent New Orleanian Sunday Times-Picayune newspaper distributor frankly vexes me.  What gives?  I respect newspaper rituals but this one has me.  As a kid when we’d visit my grandparents on Canal Blvd I would walk each day with my grandfather down to Meme’s at Robert E. Lee and get a couple of papers.  He’d bring enough coins to buy two from the vending machine: one copy for us and one for my aunt on Vicksburg.  My grandfather would always, always, always buy for one, take two, and shut the machine.  Then he’d buy again, take none but just open it, and then shut it.  That’s just what he did. 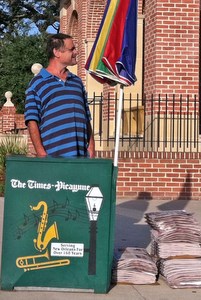 And so it is with Sundays.  Is it simply what it is?  A once a week hey-how-you?  This past Sunday I ventured out on bicycle and asked.  First I made my way to Napoleon and St Charles where I met Tommy DeMaria.  A soft spoken and genial fellow, Tommy says he sells about 50 papers every Sunday and has been doing so since Katrina.  And yes, he reaffirms, he’s only there on Sundays, but as to why, he supposes so no one steals the paper.  This is Tommy’s second corner.  He started at Freret and Napoleon a couple of years ago but moved to this one after an assault. I then wheeled over to Tommy’s previous spot where I met:

Arthur Joseph!  Arthur offers a colloquial presence that might surprise the uninitiated.  For all the times I’ve seen Arthur I had always imagined him a little quiet or reserved.  On the contrary, Arthur peppers his speech with exclamations such as “Another satisfied customer!” Or in the event of a nice tip: “That’ll make the rooster crow there – I tell you what!”  It’s a contrast from Tommy, but each handily provides a level of service that brings their customers around each week with regularity and diligence.  And so for Arthur and Tommy, their part of this ritual is putting the the “custom” in “customer service,” one Sunday at a time.

3 thoughts on “Jean-Paul Villere: Any given Sunday”