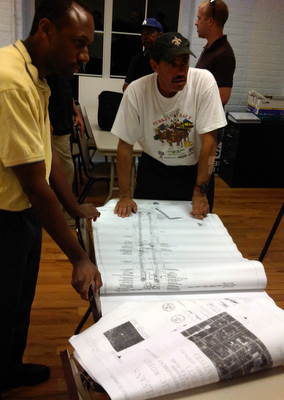 The final plans for upgrades to Freret Street’s curbs and sidewalks were met Monday night with disenchantment and deep-seated frustration that merchants and residents did not have more of a say in the planning of a project that will disrupt traffic for months on a street struggling to come back to life.

No one spoke in opposition to the $500,000 project itself, but a number of people in the audience who have been seeking a meeting with city officials for months were dismayed that the message of the meeting was that the time for discussion is over.

“There’s a lot of valuable information that would have come from the neighborhood if you had been in communication with us,” said neighborhood resident Jane Dimitry.

The project will focus on repairing curbs, planting trees, installing signs and building rounded “bump outs” at some intersections between Napoleon and Jefferson avenues, explained Mike Ingo, a project manager for contractor F.H. Paschen. Construction will begin Nov. 1 at Jefferson in the downtown-bound lane, work block-by-block down to Napoleon Avenue, then start over at Jefferson in the Uptown-bound lane, he said.

The work will be planned in week-long segments to avoid leaving unfinished construction over the weekends. Traffic will be routed around the workers where possible, but any detours that are necessary will be sent down South Robertson. The entire project is contracted for 180 days and should be done by June, Ingo said, and the company will try to accomodate individual businesses as they are affected — such as scheduling work around their 18-wheeler deliveries, or building platforms to corner businesses while construction surrounds them.

“Nothing will be a surprise,” Ingo said. “We’re going to try to give everyone a heads-up notice.”

Many business owners feared that the timing of the construction, however, could cripple the recovery of Freret’s commercial corridor. Troy Rhodies of Freret Street Po-Boy and Donuts said that the new “restaurant row” will be especially affected.

“You’re putting this right at the front door of our best time, and you’re dropping us off at our worst time, in June,” Rhodies says. “Everyone in the whole city of New Orleans knows that restaurants are primarily slow in the summer time.”

Andrew Amacker, president of Freret Neighbors United, sharply criticized the city’s lack of communication with residents and businesses. City officials have held two meetings over the past year — the first, a brainstorming session for ideas for the project, and the second, with a preliminary set of plans — but Amacker said the neighborhood never were never invited to comment on the actual plans.

“It’s ridiculous to be here, a few days before construction is supposed to be starting, and say, ‘These are the plans,'” Amacker said. “How are we supposed to have input?”

Valerie Moten of the city Department of Public Works replied that officials didn’t want to have a meeting about the final architectural drawings “because they could be misinterpreted.” Amacker called that response insulting.

“You never came back and said, ‘This is what we designed. Is this OK?'” Amacker said.

Kellie Grengs of The New Freret business association said she distributed a copy of the final plans via email this summer, after obtaining them directly from the contractor — an effort that led to the removal of new bump outs at Freret bus stops. Grengs said she shared in the frustrations over the lack of communication from City Hall, but also said the project’s limited scope would lessen its negative effects.

“This is not the big overhaul like we’re seeing on Magazine Street,” Grengs said.

The project was originally announced in August 2010 as part of Mayor Mitch Landrieu’s “100 projects” with a commitment of between $656,000 and $820,000, but has been repeatedly delayed and downsized since then. Several residents asked why it couldn’t have waited just a little longer, such as until after Christmas.


For more on Monday’s meeting, see a report by Tania Dall and our partners at WWL-TV.

3 thoughts on “Freret merchants, neighbors dismayed by lack of input on upcoming roadwork”