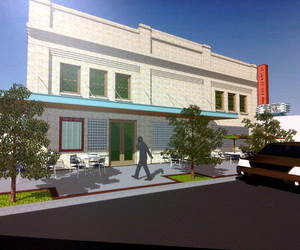 An architect's rendering of the Publiq House patio and entrance from Freret Street.

The fate of the “Publiq House” bar and live-music venue proposed as the next addition to Freret Street could depend on the opinions of the building’s closest neighbors, based on an initial hearing before the city Tuesday afternoon.

The bar is proposed for part of the first floor of the large, light-blue Neighborhood Housing Services building between Cadiz and Jena streets, and owner Rhett Briggs has pitched it as a casual neighborhood bar with an art space and a stage for both local and traveling musicians. It will be 21 and older to avoid a college crowd, and will also feature an outdoor patio with a designated parking area for food trucks, instead of its own kitchen, Briggs recently told the neighborhood.

Opening a cocktail lounge on that property requires City Council permission, and the first step was an appearance before the City Planning Commission on Tuesday. The project came with a positive report from city staffers, who recommended a number of special operating conditions that the Publiq House did not oppose: the bar can’t expand to the rest of the building without returning for city permission again; no music outdoors; no adult entertainment; no DJ; no go cups; no posting flyers advertising shows; and the building must be soundproofed, surrounded by a seven-foot masonry fence and protected by a security guard whenever open.

Only one condition was objectionable — a requirement to collect signatures in support from 75 percent of the property owners within 300 feet, said Chris Young, a consultant on the development team. City law requires such a survey from any place selling alcohol within 300 feet of a school, and the Public House would be situated squarely between two current school buildings, Sojourner Truth Academy and Samuel J. Green Charter School.

Young offered a letter from the city Department of Safety and Permits affirming that the Publiq House is outside that boundary, and asked that the condition be changed to simply read that the bar must comply with that portion of the law, essentially leaving the decision about whether a survey is necessary with City Hall.

The city planning staff said Safety and Permits miscalculated the distance, and that the Publiq House is within 300 feet of both schools. Specifically, the letter says that “the door of the proposed business” is greater than 300 feet from Sojourner Truth, and the planning staff says that its interpretation of the law is from lot line to lot line. 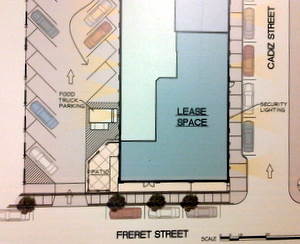 The proposed layout of the Publiq House inside the NHS building.

The law actually says the distance “shall be measured as a person walks, using the sidewalk, from the nearest point of the property line of the playground, church, public library or school, to the nearest point of the premises to be licensed.” A city attorney at the hearing gave a third interpretation of that section: not the door, not the lot line, but the closest point “where the alcohol sales would actually occur” is the starting point for the measurement.

Young used that interpretation to bolster his point the bar is far enough away from the school, and that the planning staff made the wrong measurements.

“I don’t know how they could have measured it, not knowing where the premises begins inside of the building. It’s not to the property line, it’s where the premises are within the building,” Young said. “We believe that proviso should just say ‘comply with that provision of the law,’ because city planning is not going to make that decision anyway — it’s Safety and Permits.”

Commissioner Kelly Brown initially suggested the council assent to Young’s request, but only found one supporting vote among the five commissioners present. Commissioner Louis Volz said he believed the survey of neighbors was necessary, and offered a motion to grant the bar’s use only if it filled that condition. That motion passed 5-0, with Commissioner Lynes Sloss recusing himself and three commissioners (Pamela Bryan, Brenda Duckworth and Joseph Williams) absent.

The planning commission’s recommendation will next be forwarded to the City Council, which will make a final decision on the wording of the conditions. If the project is required to collect signagures, Tuesday’s hearing suggested that 75 percent could be a difficult number to reach.

Two Jena Street neighbors on separate blocks, Kathy Parsons and Betsy Barreca, showed up in opposition. Both said their own neighbors did not receive any official notice of the hearing, and Parsons said she collected signatures of those at Jena and Lasalle closest to the building who were opposed. Barreca, whose family owns a number of long-vacant buildings immediately across Freret Street, said the bar would “disturb our peace in the evenings.”

“This is something that I’m quite concerned about,” Barreca said. “If I sit on my back patio, I know I’ll be able to hear what’s going on in that venue.”

On the other hand, the developers had met with neighbors at the building a week earlier, and Richard Dimitry of Freret Neighbors United told the planning commission that most of the questions were answered well.

“Generally, we’re probably favorable, but the neighborhood hasn’t had a chance to vote,” Dimitry said. “We do not have a position at this time, other than perhaps leaning toward favorable.”

The informal meeting last week included extensive conversation about the developers’ plans for trash, parking and security. Neighbors United president Andrew Amacker pressed the developers on the trash issue in particular, saying their responsibility will extend beyond their own parking lot to the public lot at Freret and Jena and into the neighborhoods.

“You’re going to fill up the parking lot and the side streets,” Amacker said at the time. “I want to make sure those areas are maintained, because those people will be coming for your business, and it should be your responsibility to clean up after them when they make a mess.”

Neighbors also urged the developers to have a security system that monitors not just the club but the streets leading to and from it, citing recent violent crimes assisted by footage from private cameras outside other Freret Street businesses.

At Tuesday’s hearing, Neighborhood Housing Services director Lauren Anderson emphasized that her agency would not have invited the bar into its building if they did not see it as a good fit for the neighborhood. Since the nonprofit moves its main office to Freret Street, it has been instrumental in the commercial corridor’s revitalization, Anderson said.

“We’re not like any other landlord,” Anderson said. “We have a responsibility to the community to do what’s in their best interest.” 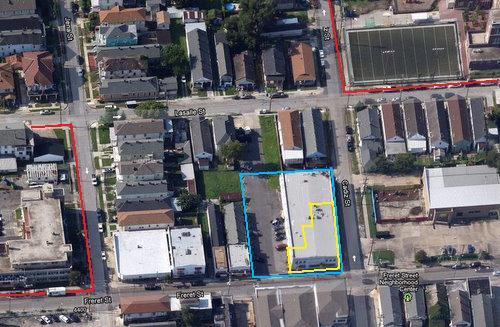 This screenshot from Google maps illustrates the difficulty measuring the distance from the Publiq House to the nearby Sojourner Truth Academy (on the left) and Samuel J. Green Charter School soccer field (in the upper right). The red lines approximate the schools' property lines, and the NHS building's property line is in blue. The Publiq House's space inside the building is in yellow, and whether the bar is more or less than 300 feet from either school apparenly depends on which boundary is used for the line. (Base image via maps.google.com, property line estimates by UptownMessenger.com. For illustration purposes only; not intended as a scale or official representation.)